From Belgrade to Sicily and back by car – a self proposed challenge. The vie from the Palermo cathedral, the best seafood risotto in Cefalu, the tastiest chocolate in Modica. All in all six thousand kilometers

Sicily can be reached in two ways – comfortably, touristy, like most visitors do, through travel agencies, by booking an b&b and running around this amazing island for ten days, trying to see, pardon, to catch a glimpse of the atmosphere in century old hillside towns, sinking in the architecture and experiencing a real cinematic walk in some ghost town. I tasted this method a couple of years ago, saw all the places that tourists see – Etna, Catania, Taormina, Siracusa and fell in love with the island, promising myself that I would come back for Palermo, which I somehow missed, as well as other hidden gems. This challenge made us take up a 6.000 kilometer ride, a third of it on the island alone! 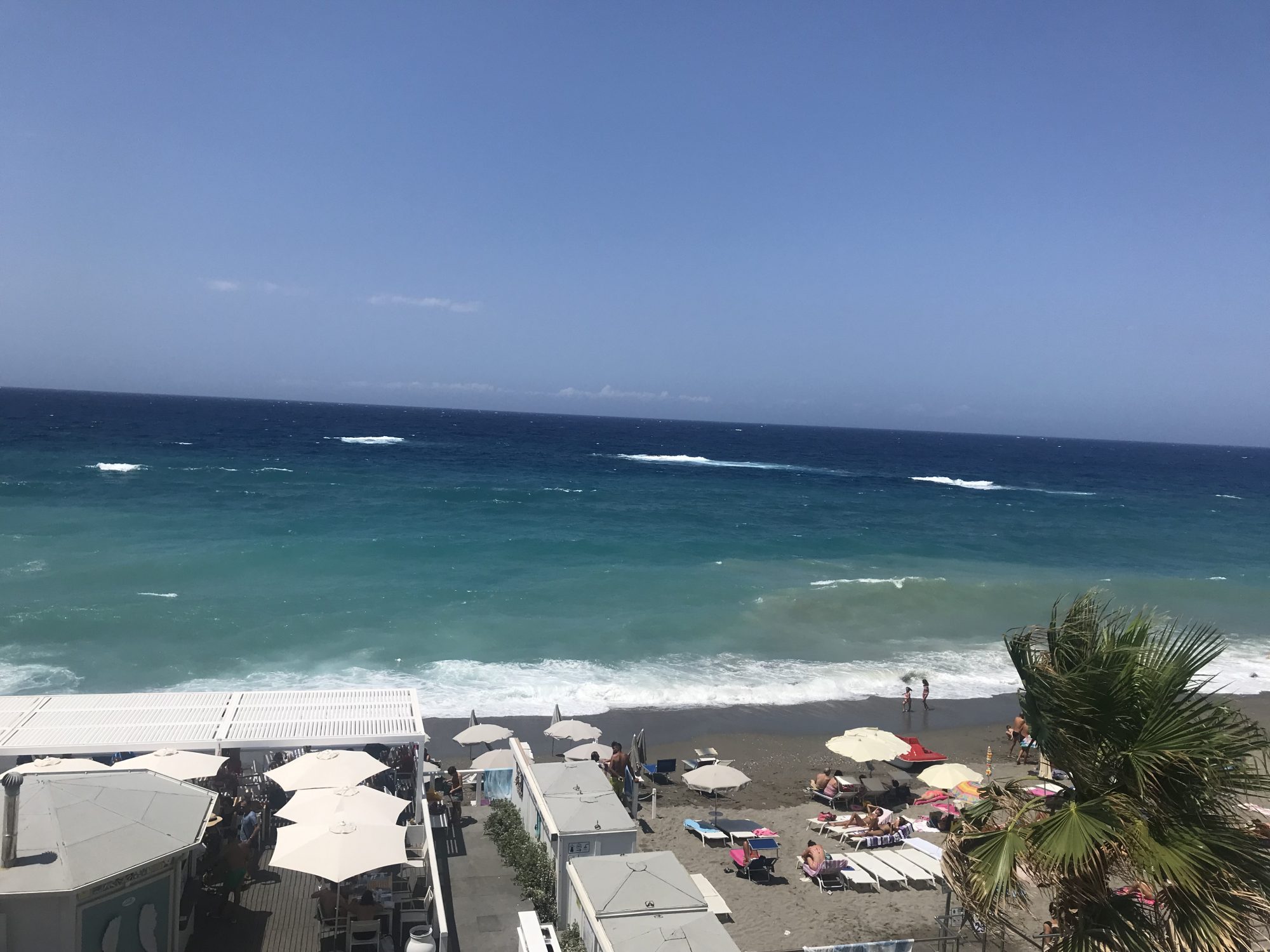 Rule number one; never go to Sicily in august, like any other Italian destination during feragosto. Locals claim that it’s best to visit in spring or fall.

If you are a passionate sport mode driver you’ll enjoy the amazing road, especially the part between Florence and Rome, so called autostrada Direttissima, impeccable asphalt, multiple cyber tunnels and grade crossings, swift and temperamental local drivers. You could reach the island in one take, but that would be forcing it, you could also take a break somewhere, Rome for example. 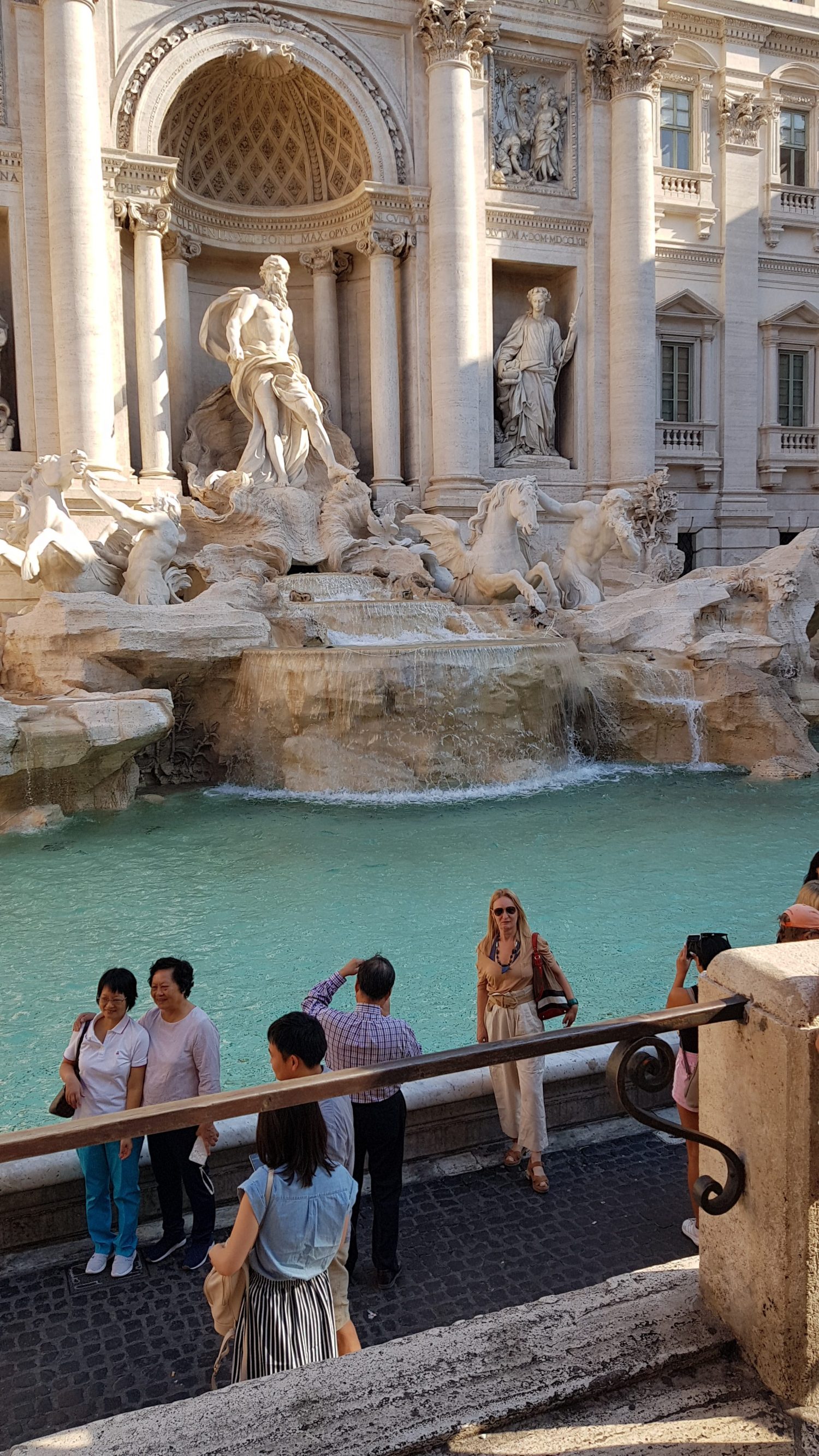 Never forget that even the most closely planned out trips can end down the drain, because this is Italiaaa. Let’s take our experience as an example, even though we booked our hotel three months prior to the trip, one we already stayed at due to it’s fantastic location and private parking, upon arrival we were greeted by a surprise: sorry, problem! Your room is unusable. After thirteen hundred kilometers someone tells you that not only is your booked room unavailable but you can’t even get a less likable one!? You feel like choking the receptionist and shaking him up so that his sorry stays inside his throat. But he has a solution, a great one indeed, a similar hotel, with an even better location few meters from Fontana di Trevi, wet dreams of tourists. Of course you can’t park your car in front of the fountain, but if you don’t feel good about this suggestion peccato! What can you do, accept, take a cab there, pay it first then get refunded, carry your luggage through galloping masses of tourists on their way to the fountain, and get to the dusty hotel you didn’t book, not even close to it, where dust in the room seems to be part of the authentic centuries old medieval building. Instead of falling in despair – a smile and happy thoughts, in the morning you’ll be the first one to get to the edge of the fountain with no fuss, take a great picture and than have enough time to sightsee in the city center. 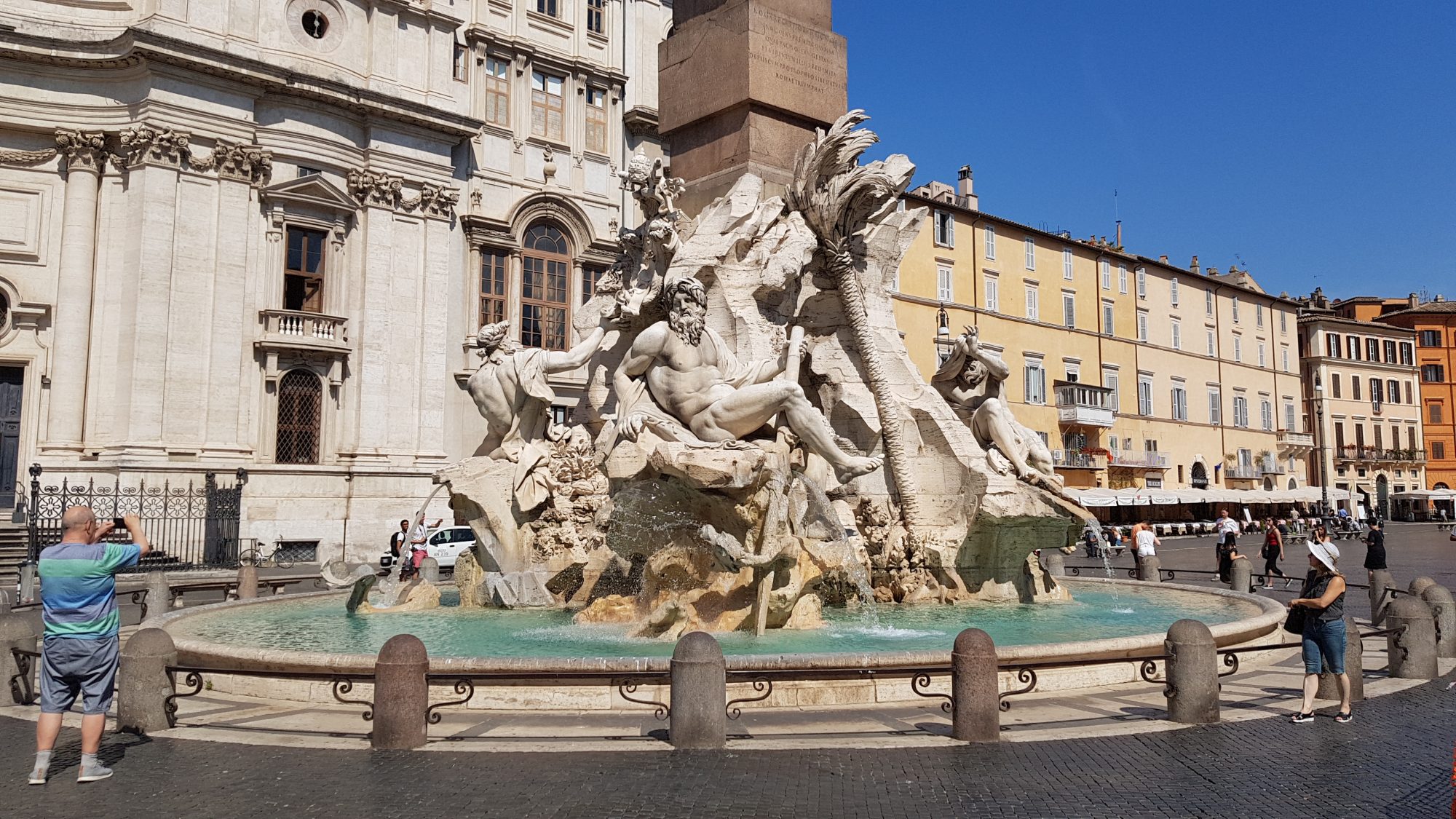 This positive mantra was necessary tomorrow again while in line for the ferry, we patiently waited in line with a dozen other cars when tens of others started racing towards the docking line from both sides. All in all that’s how Sicily works – rules are made to be broken; there is no shame, but also no judgment when you do it yourself. An oddity while driving is the habit to leave your blinker on for fifteen minutes after it’s original use, as a fashion accessory, making you guess whether they’ll switch lanes now or in a hundred kilometers. 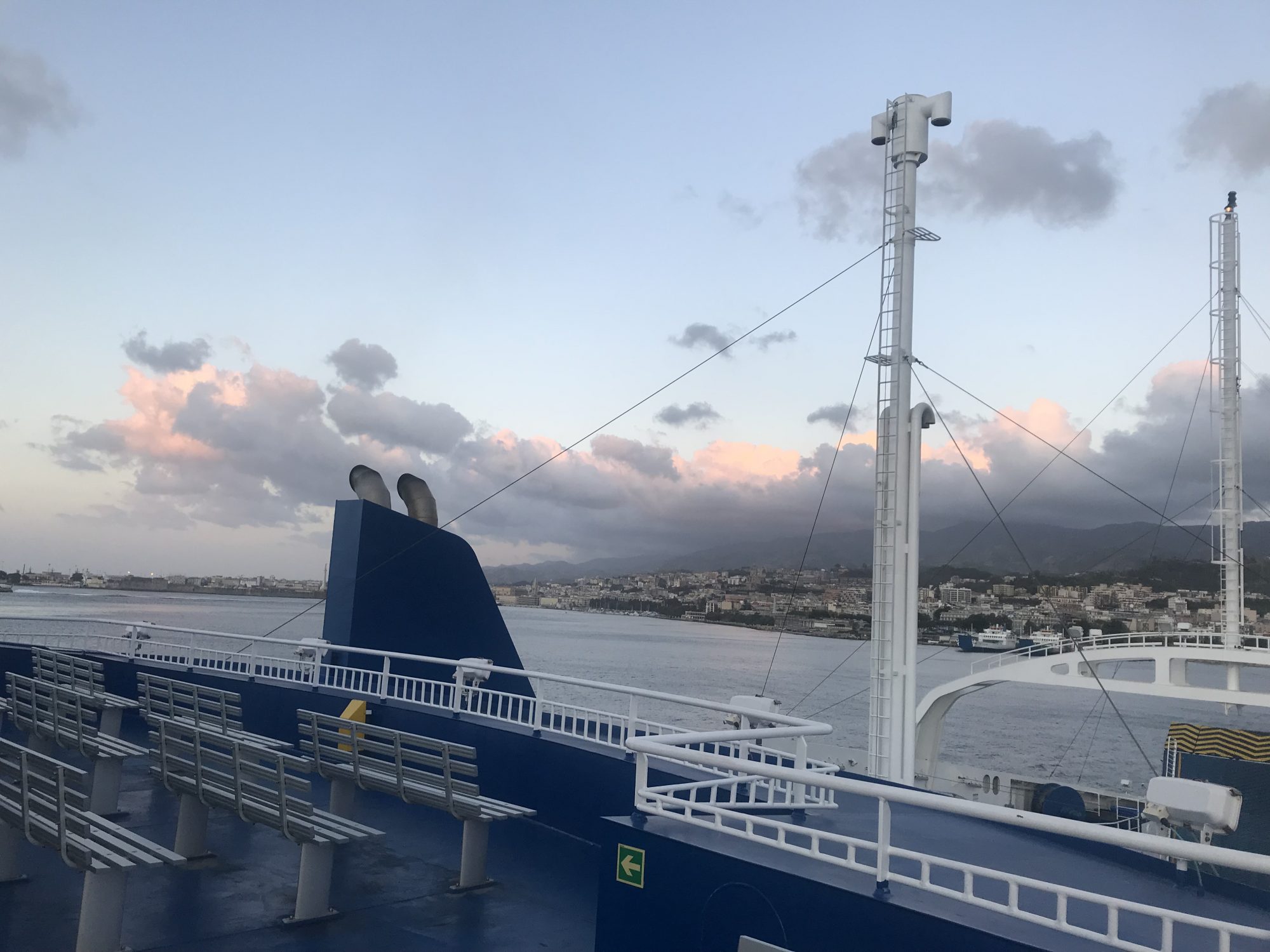 Unlike the resort we stayed in during our first visit to Sicily, this time we chose a charming hotel with apartments Vuele residence in a calm town Capo Dorlanda, on the north side of the island in Mesina district, on the lone sandy beach stretching for kilometers by the road. A typical city beach with restaurants, almost completely empty in the mornings and Copacabana like in the evening. 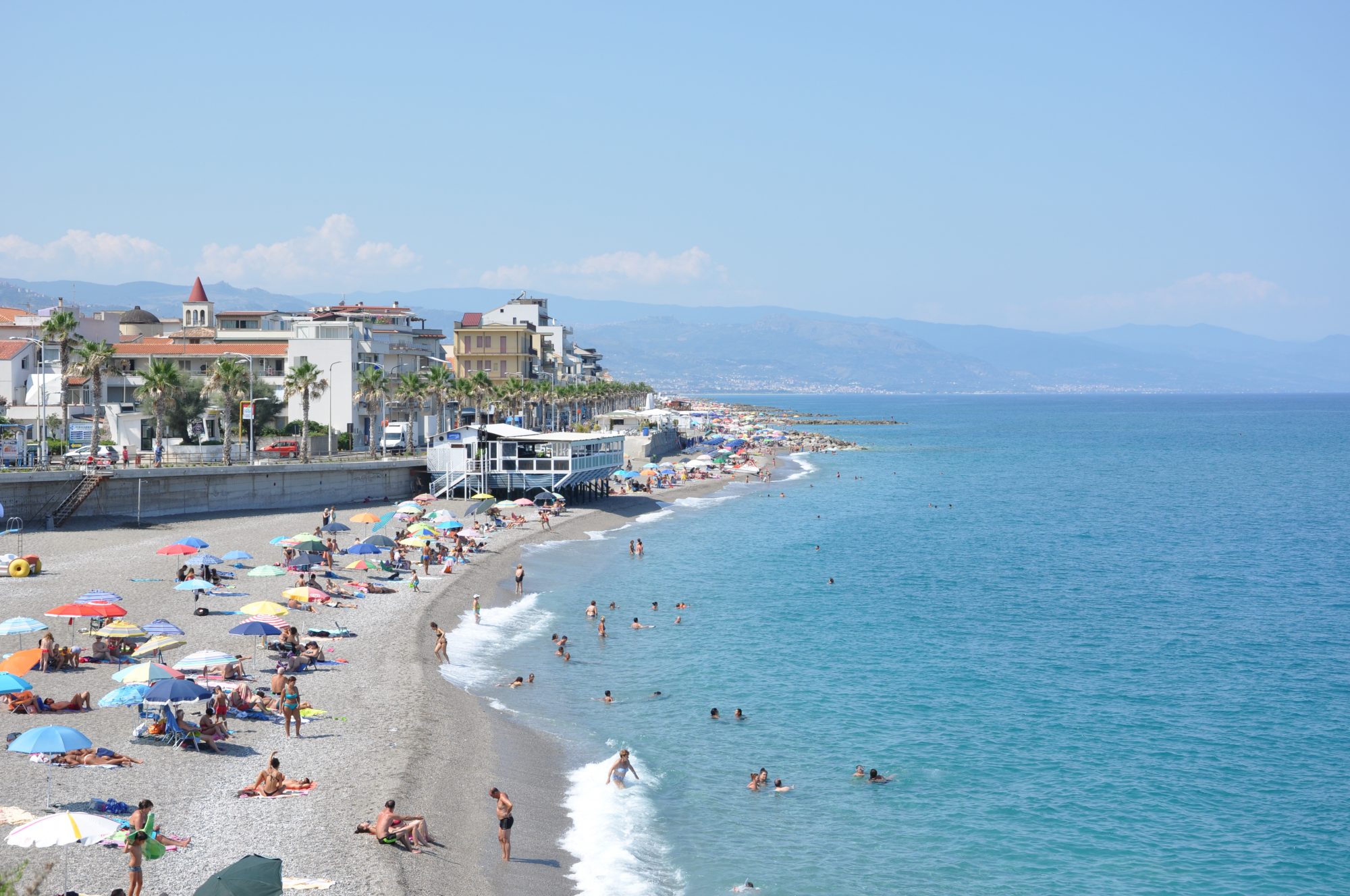 Dozens of teens were all over the place with towels on their shoulders, without any intention of leaving you with five centimeters of intimate space, even though there was no need for crowding in some cases. The peak of this odd behavior was when a young man threw his towel over some girl’s foot in order to lay down! She didn’t even notice that while yelling to her friends who were browsing the area. My impression was narcissism – many pushed out and pumped up chests, looking proud even though their height wasn’t something to brag about. In any case most of them were the same height, why the complex then. The girls were fit, temperamental, always ready for a verbal conflict, mostly wearing g sting bikinis, usually singing. We soon realized that afternoons on the beach were unnecessary, jumping over the masses in order to reach the water and then pushing around in the shallows isn’t really our drift. Instead of acting like sardines we chose to tour the island, sometimes for the whole day and sometimes just for the afternoon.

In the end the car revealed that we crosses two thousand kilometers on the island alone – Palermo, Cefalu, Agrigento, Modica, Savoca … breathing the cities in, walking the empty streets, following our instincts and partially discovering places that need more time to fully be understood. 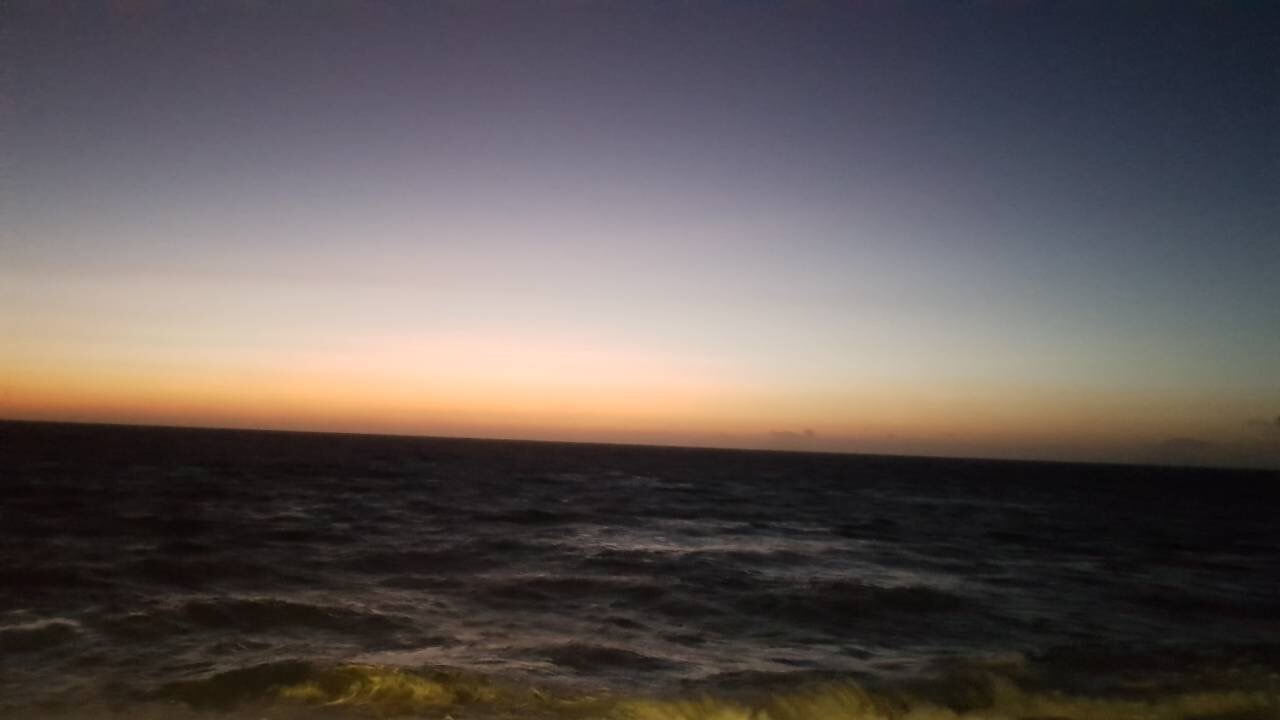 In the capital of Sicily, Palermo, we spent a whole day because a city with such energy, sensual and chaotic, a mix of cultures, incredible architectural accomplishments and gorgeous gates begs more time. Besides for walking and eating (pasta and cannoli) we spent a lot of time at the cathedral (built in the 12thcentury, a part of it’s history even a mosque), where we witnessed a wedding, and then the most breathtaking view from the roof reached by a hundred steps. 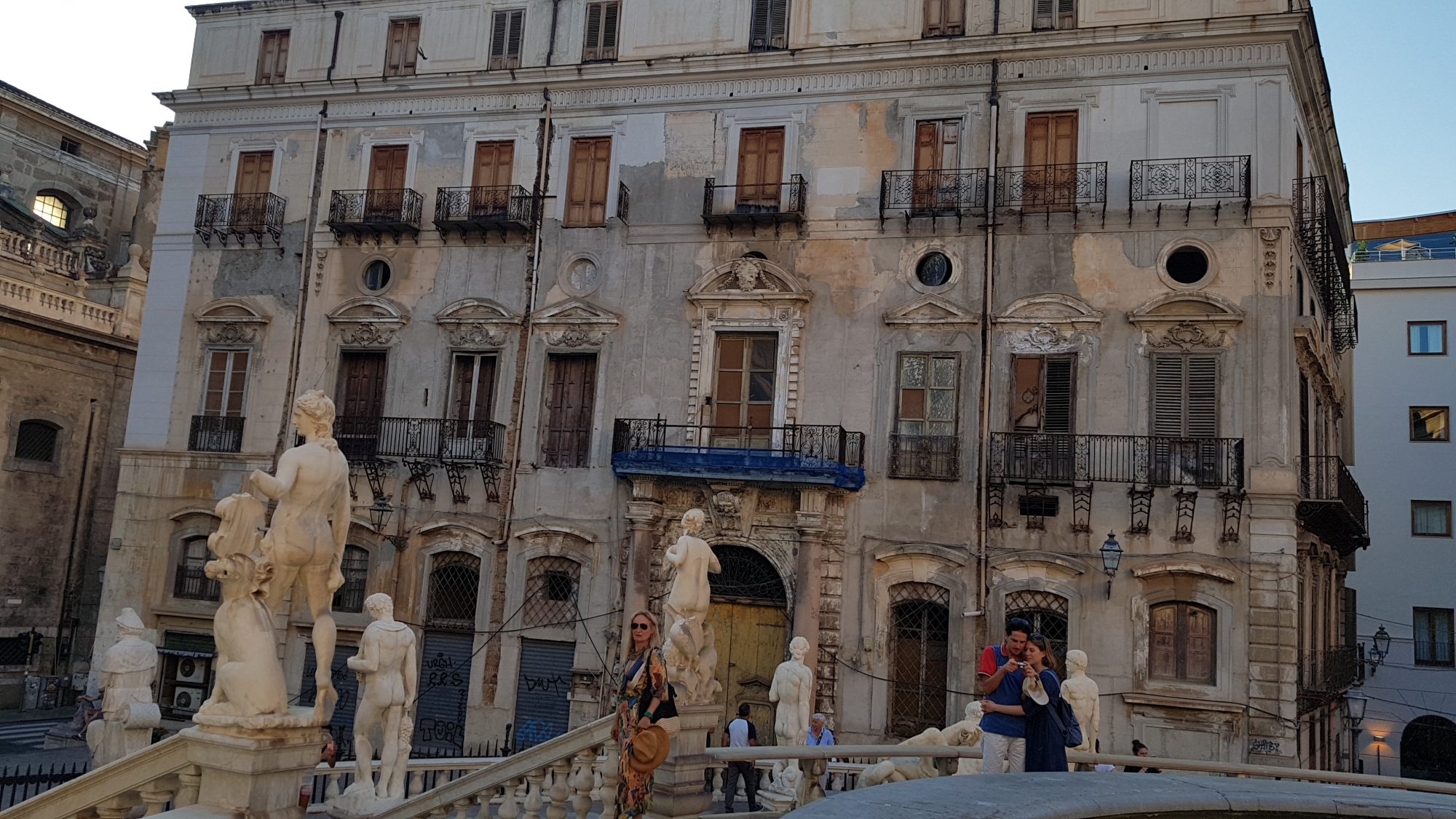 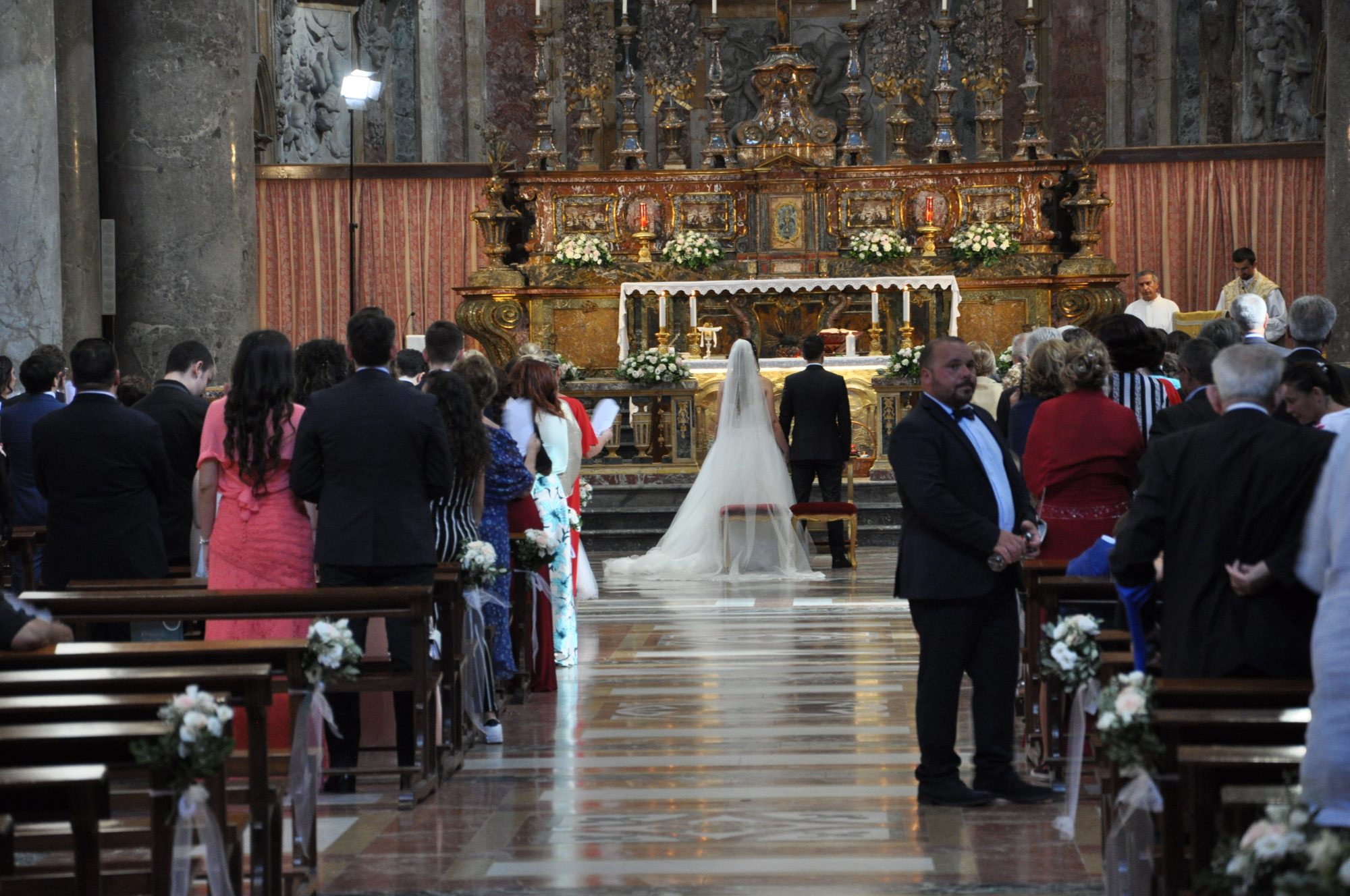 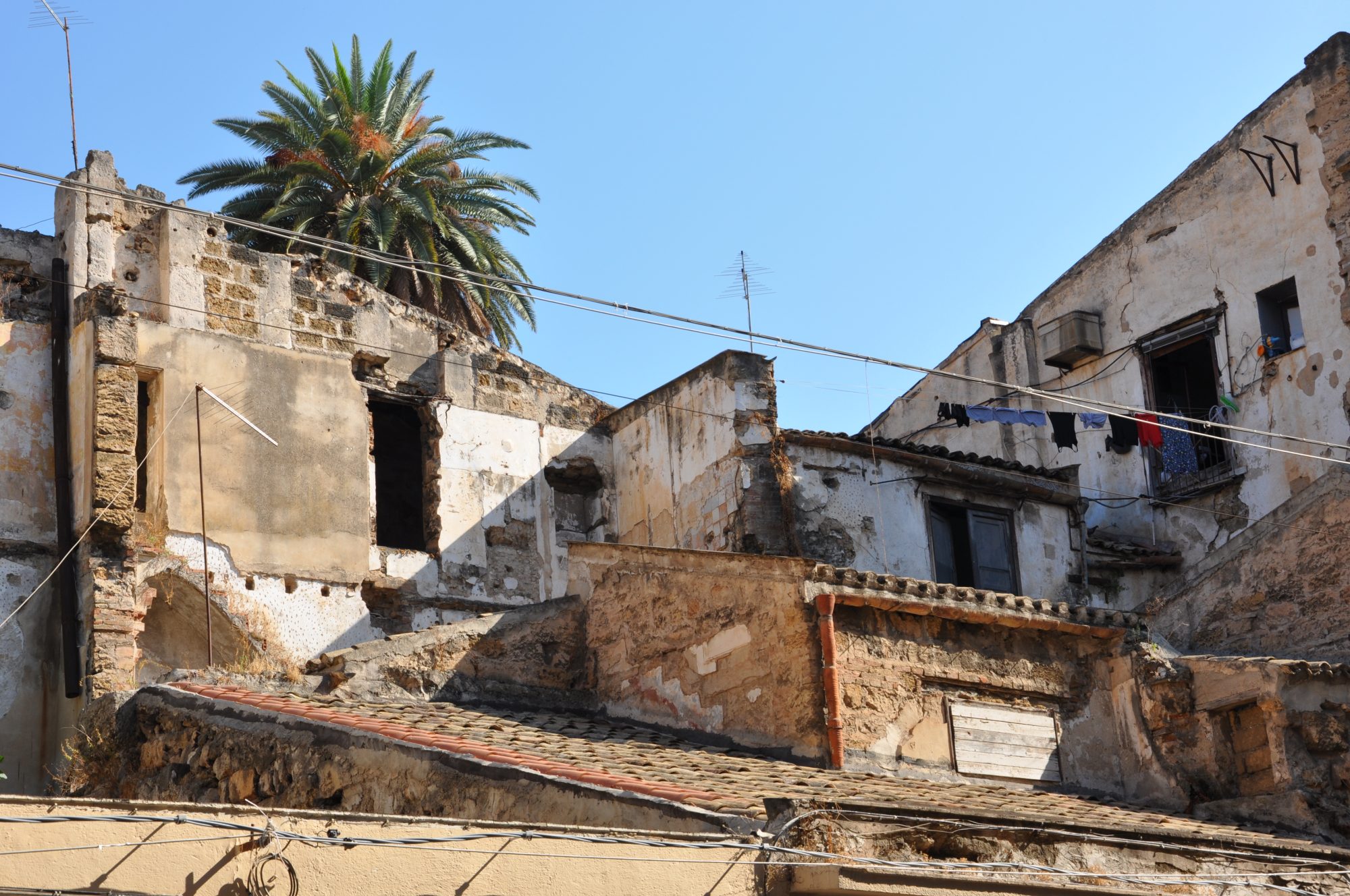 This is the only town is Sicily where you can eat for 24 hours, those aware of Italian habits know how hard it is to have a lunch or dinner at any time except for the designated one. It was common for us to stay hungry if for example, we missed lunchtime on a Saturday while driving around the island, because during the weekends you can’t even get a sandwich at the gas station.

If it’s up to me I’d miss a meal every day when there’s a new mystery behind the hill, like the one in Savoca village, claimed to be one of the prettiest in Italy. Situated between Mesina and Taormina, known for Castello di Pentefunas well for being the location of multiple scenes in Godfather part I. Even though there aren’t any signs the road takes you to Bar Vitellias well as the church Don Corleone got married in. 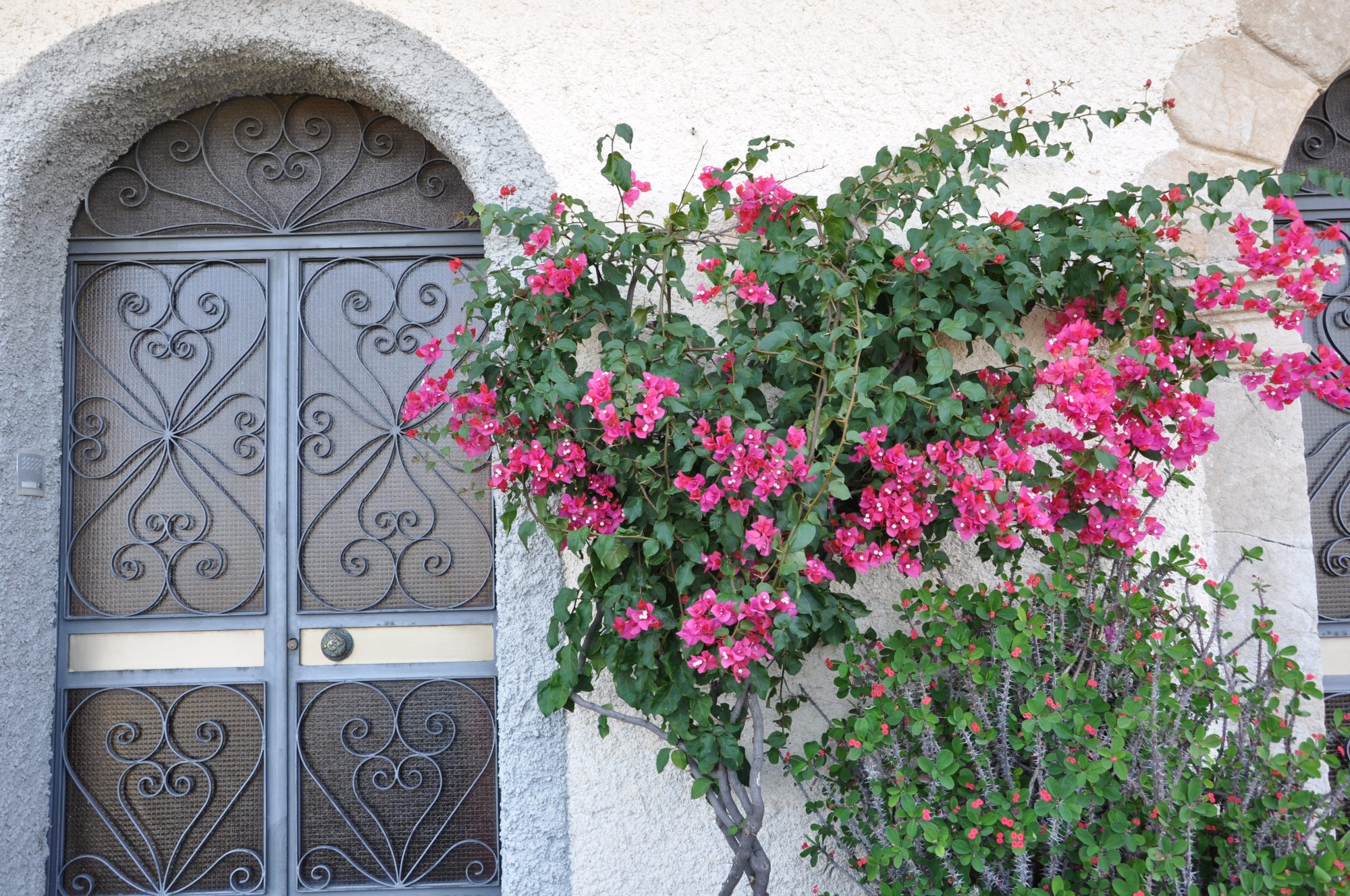 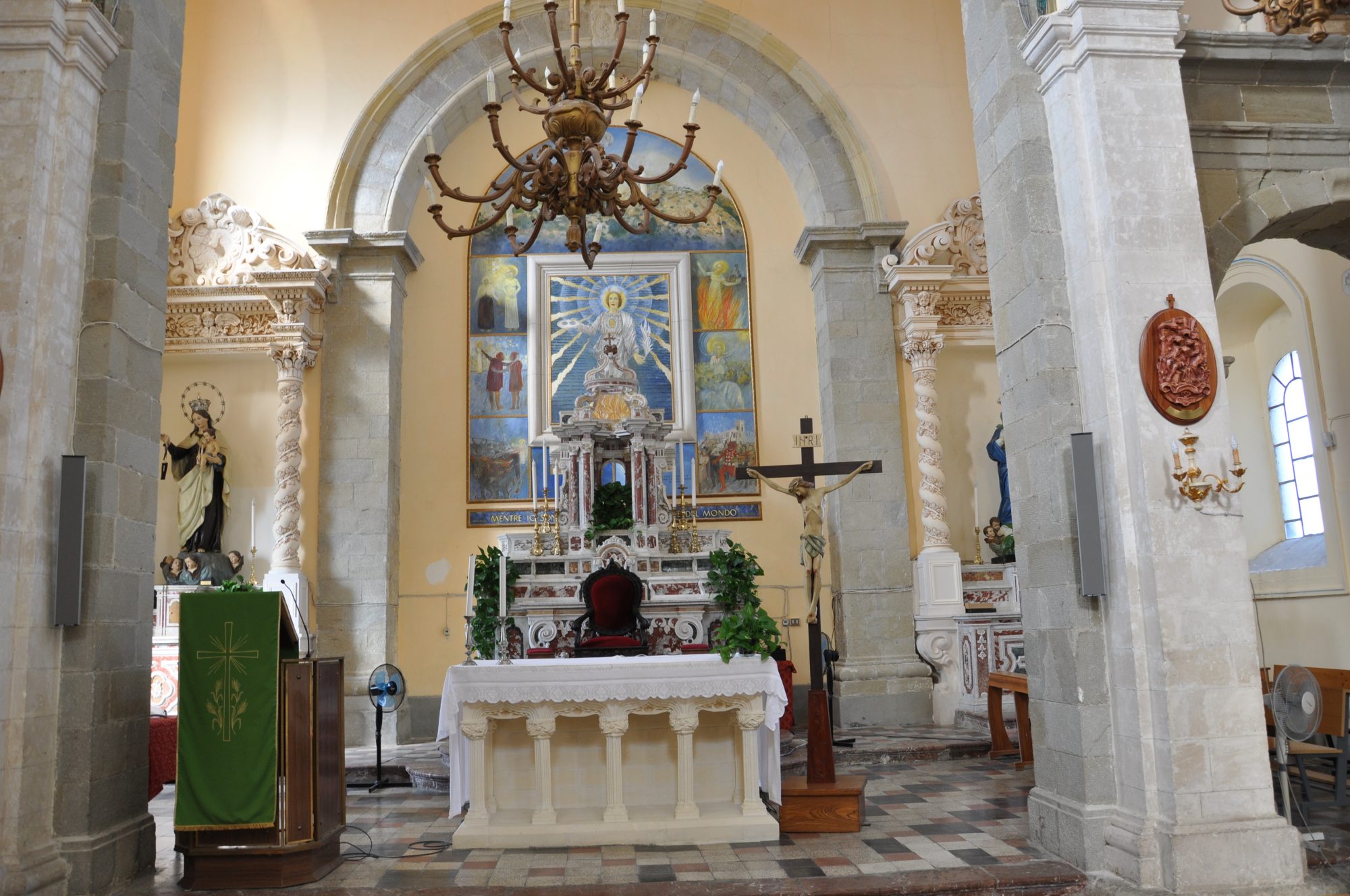 While we wondered the abandoned cobble streets we bumped into two Americans warning us about a not so poisonous but very feisty snake on the loose… enough of a reason to head back to the city and find a typical touristy scene – a branded Fiat you can rent and feel the authentic movie scene experience called 500 vintage tour. 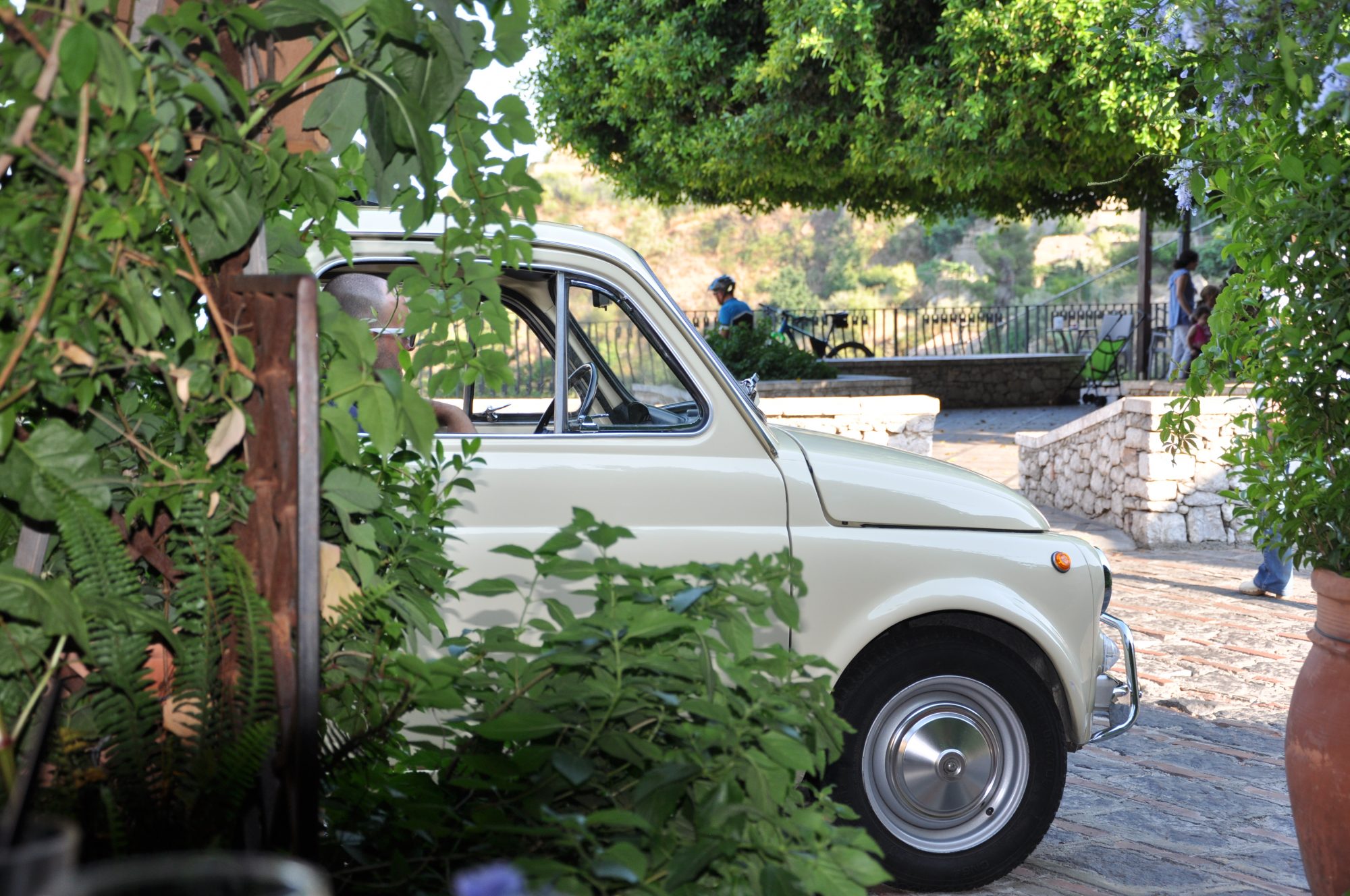 Actually, Sicily was always bait for producers. The current TV history revolves around the popular show Inspector Montalbano, coincidentally, during our stay there the writer of the novel this show is based on passed away. Since he was born in Sicily a couple of places showcased a thank you note in memoriam. A part of the intro of this show, a phenomenal panorama captured from a chopper was filmed in a baroque town Ragusi Ibli that is protected by UNESCO. 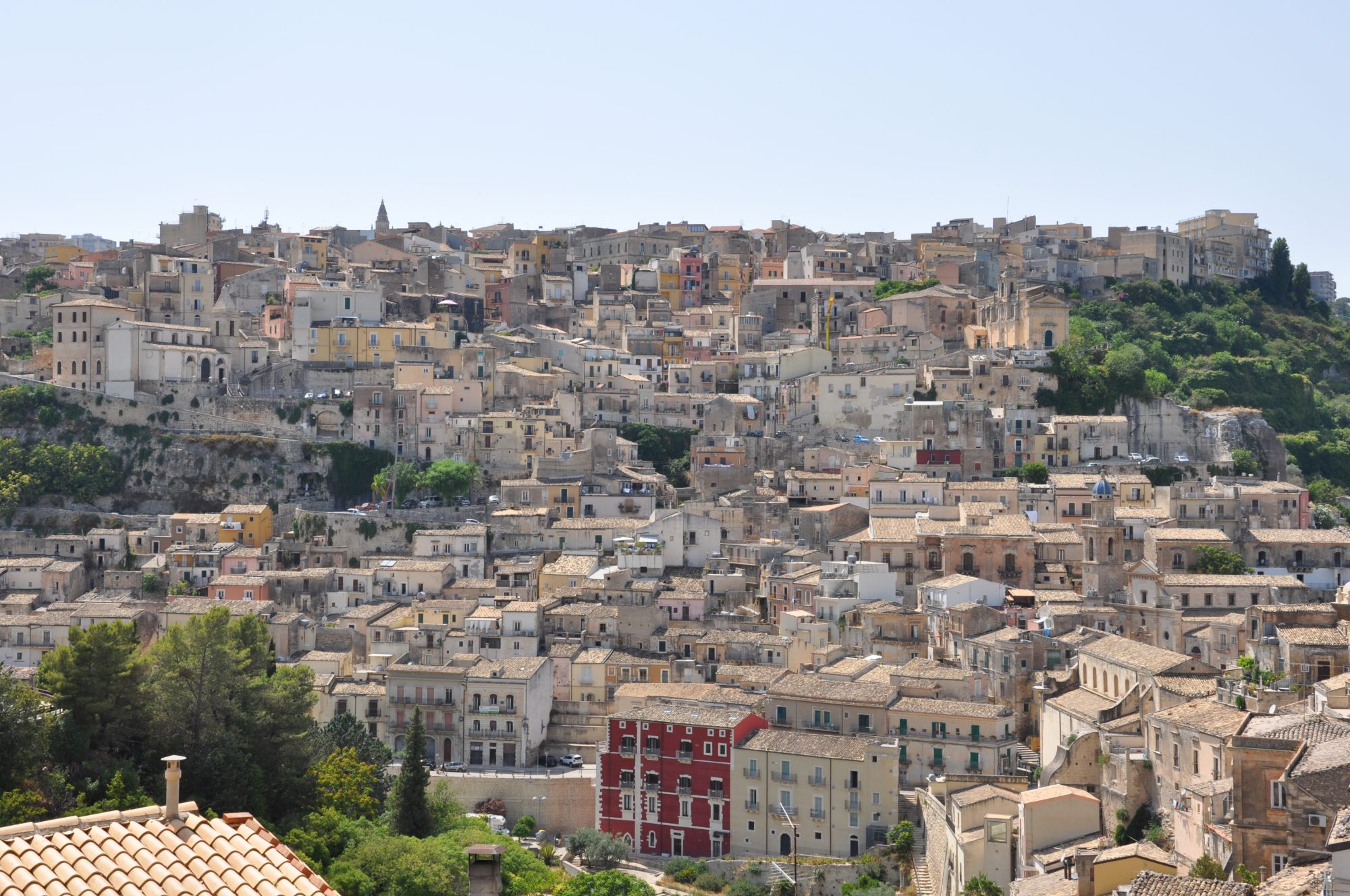 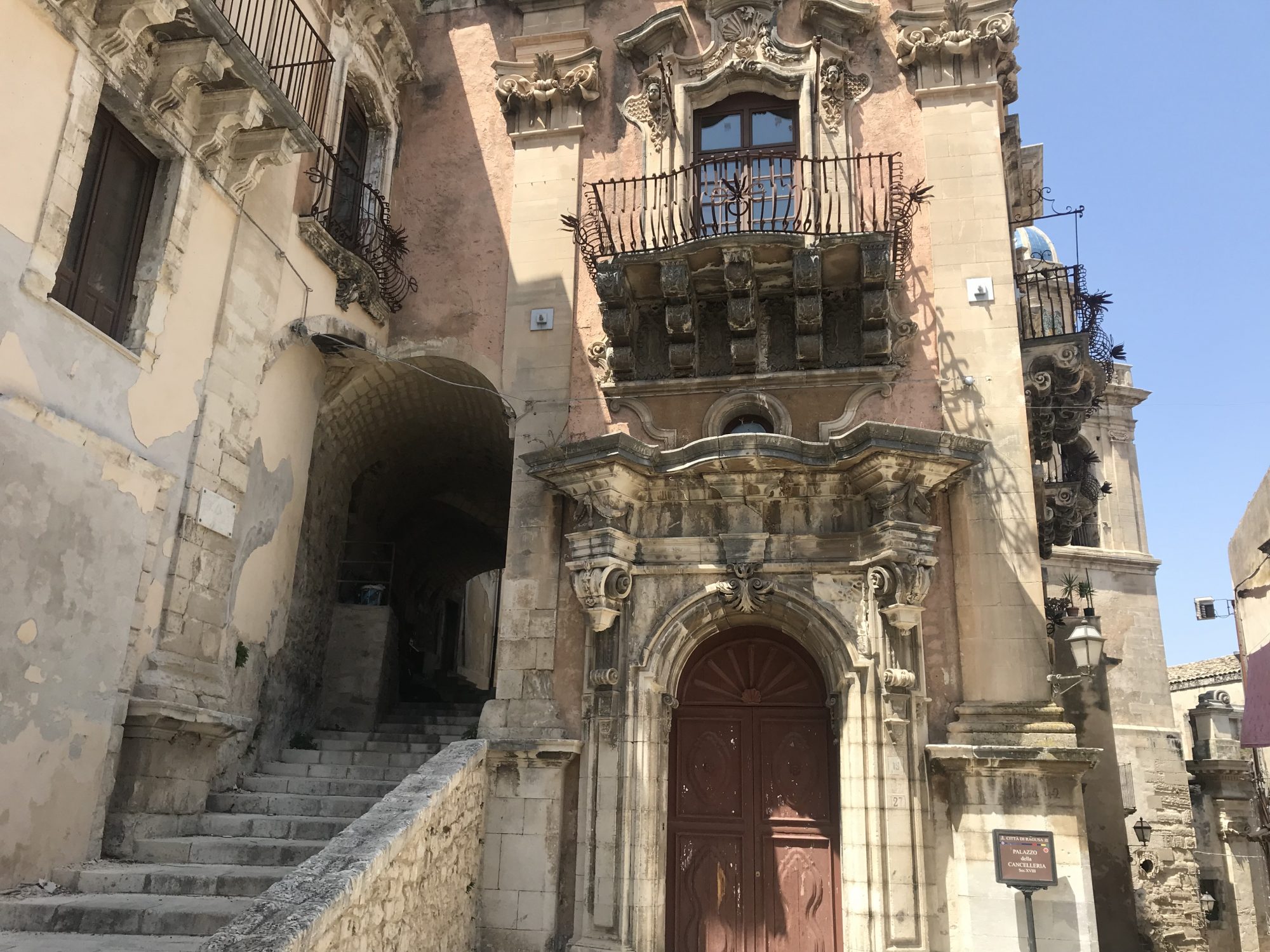 Intertwining tiny cobblestone streets, incredible buildings and squares leave you breathless. And in case you find yourself there during the warmest part of the day, you’ll have a chance to walk around more secluded parts of town alone. An incredible feeling compared to most crowded touristy cities. 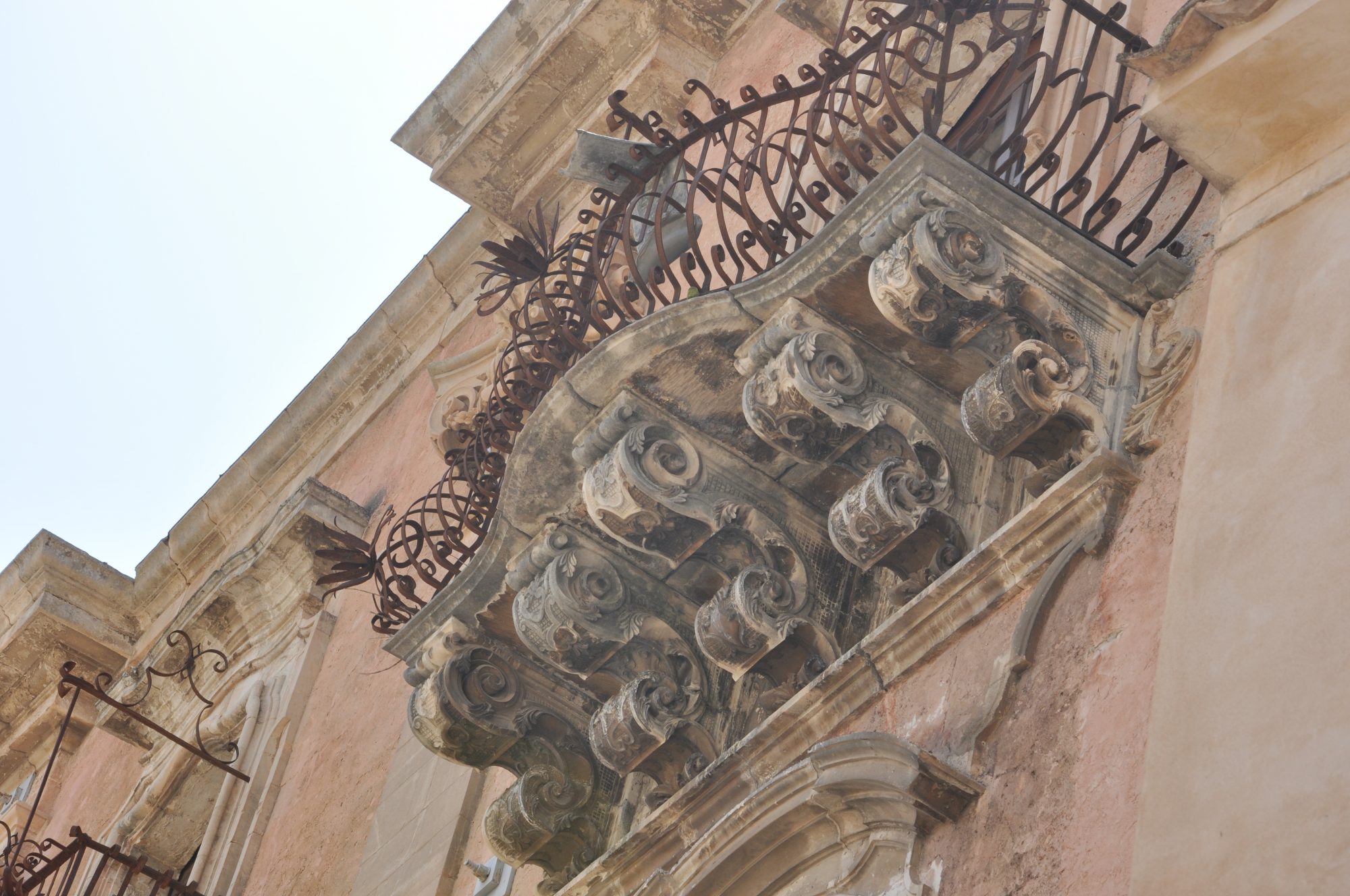 Same goes for another town, Modici, to this day known for its special chocolate and the best kept secret in the world. In the 16thcentury when Spaniards occupied Sicily and brought and Aztec recipe from Mexico. Unlike the familiar taste of chocolate, Modica’s is bitterer, and has for centuries been used in meat gravy or as a salad dressing. Generations of Sicilians from Modica used a special cacao mix made on the stone lava in Etna, with added lemons, pistachios, cinnamon, sea salt, vanilla, caramel, cherry, ginger… On that Saturday afternoon a couple of chocolatiers were open and offered over 150 different varieties. Besides for the chocolate museum Museo del Cioccolatothis town understandably holds it’s own ChocoModica, therefore lovers of baroque architecture and sweet tooth-ies welcome. 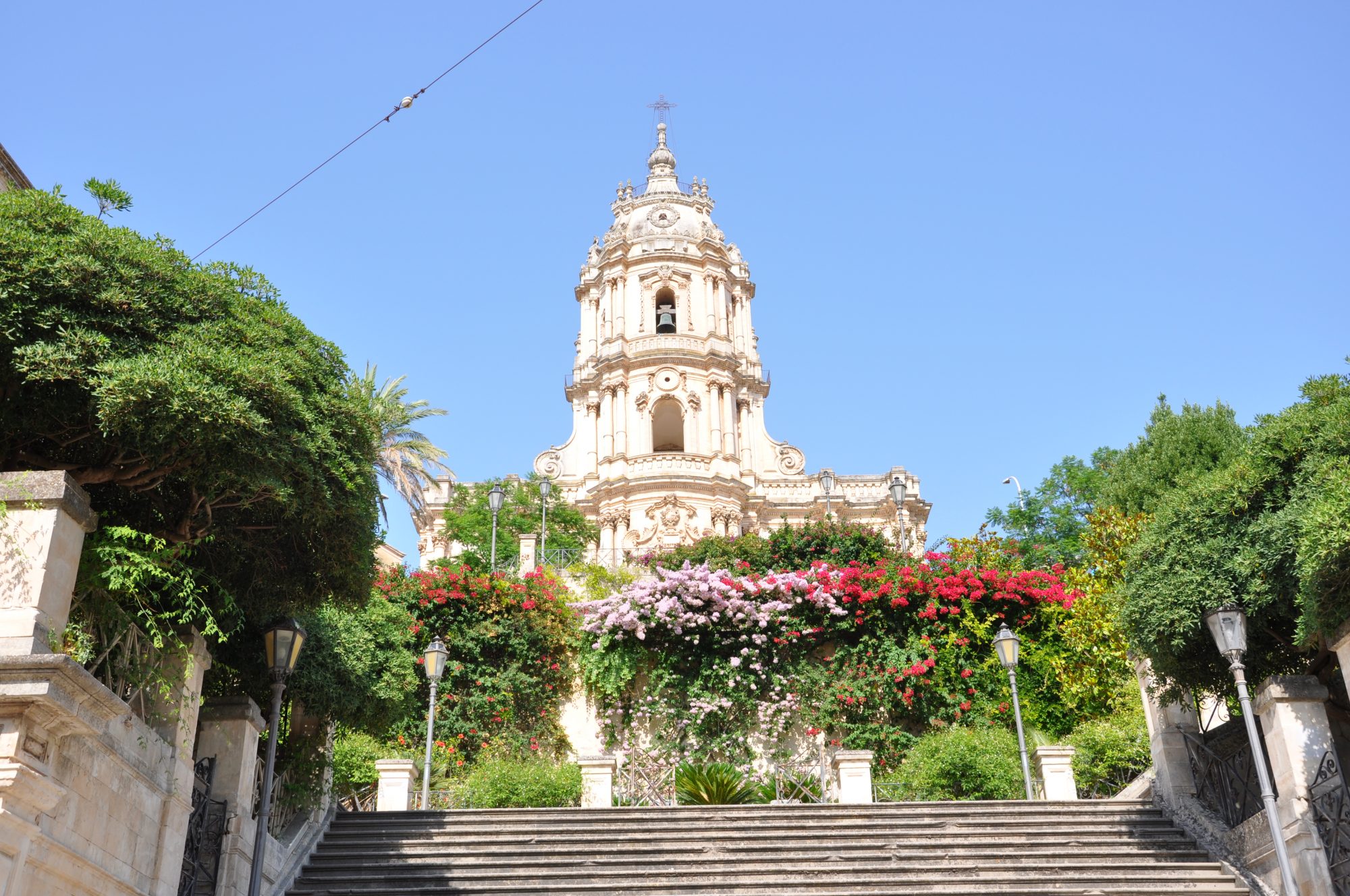 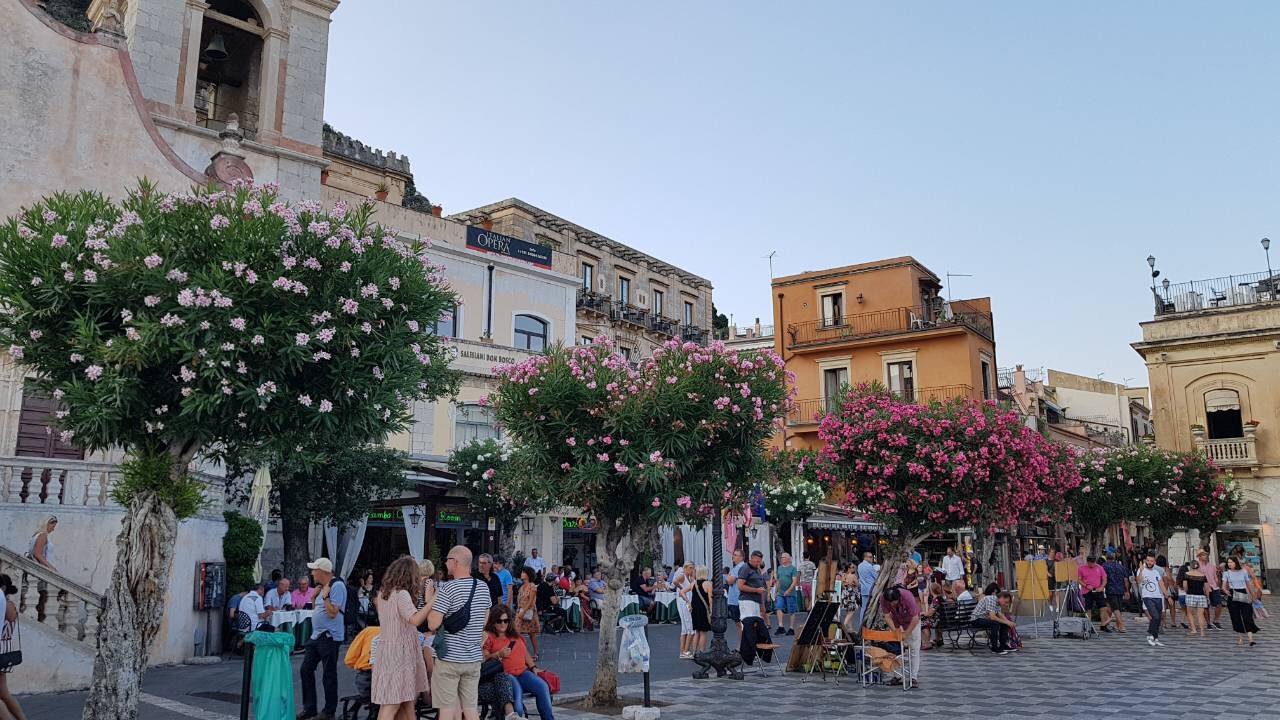 The impression Greek culture had on this island is evident in every step you take, but one of the most obvious ones is Agrigento – the valley of temples. Here you can see one of the best-kept temples built in Dornish style, seemingly untouched upon first glance. This is actually one of the best-preserved archeological parks in the world and the excavations are still under way. It is believed that enormous treasures are hidden below. 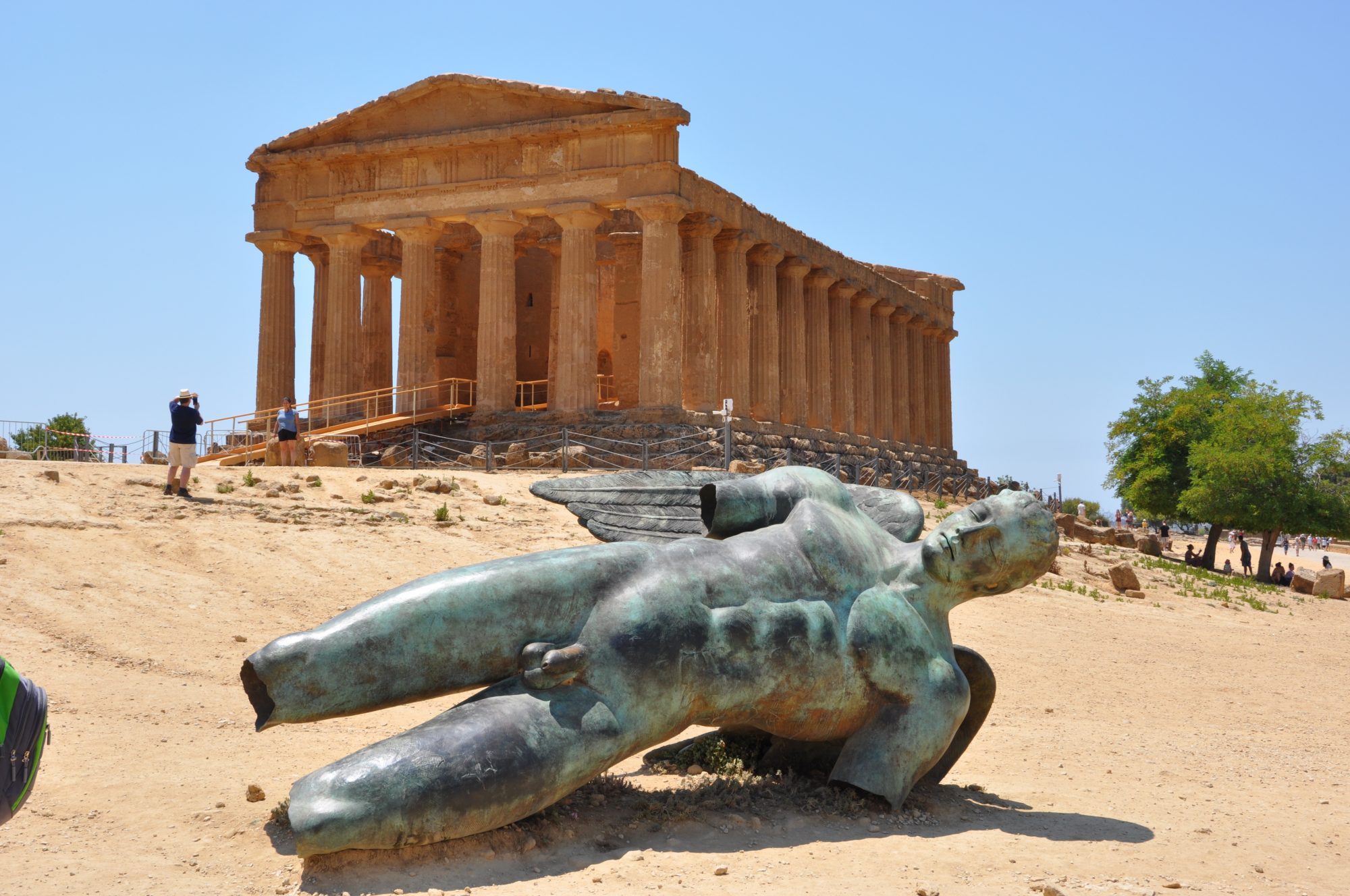 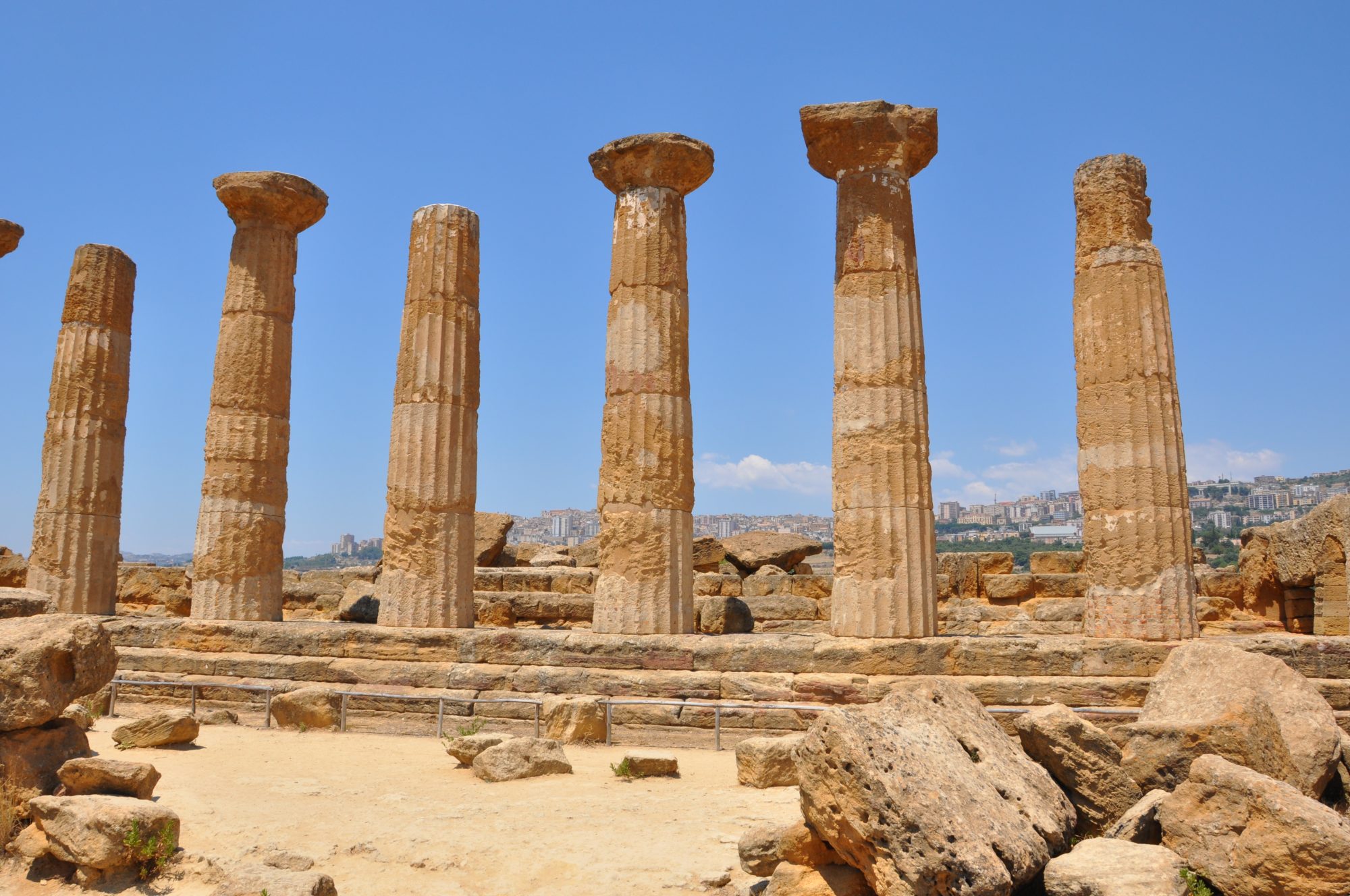 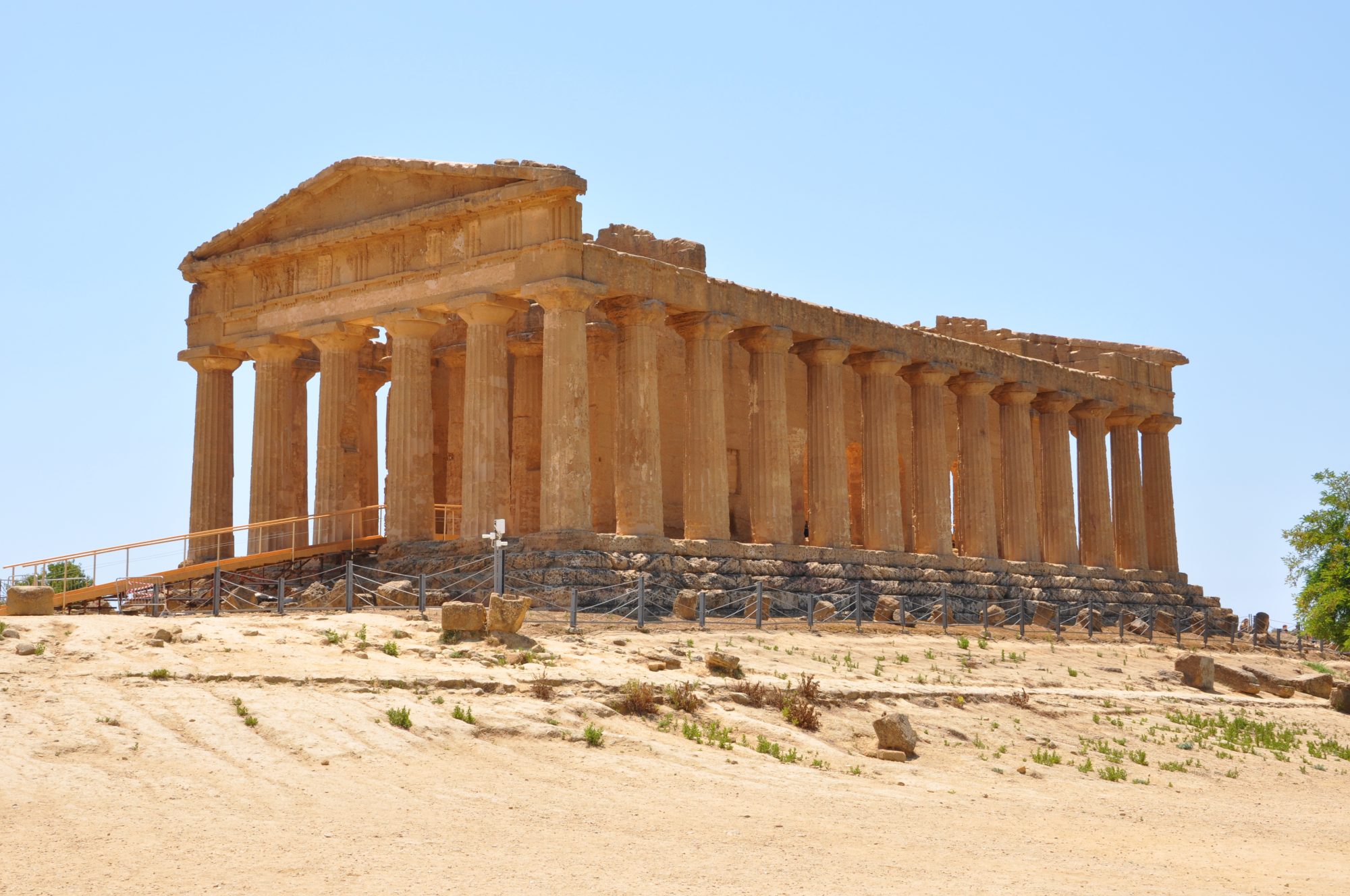 Lovers of nature can’t miss Scala dei Turchior the Turkish steps. An incredible beach close to Porto Empedoclam on the south side of the island, popular due to the white rocks rising above the sea. Blindingly while contrasting the blue sea creates and incredible impression. Curious tourists climb its soft sides in order to enjoy the view while the more courageous ones dare to jump in the water from small heights. The two sandy beaches in between the rocks are full of beachgoers, especially in august when the crows are unbearable. 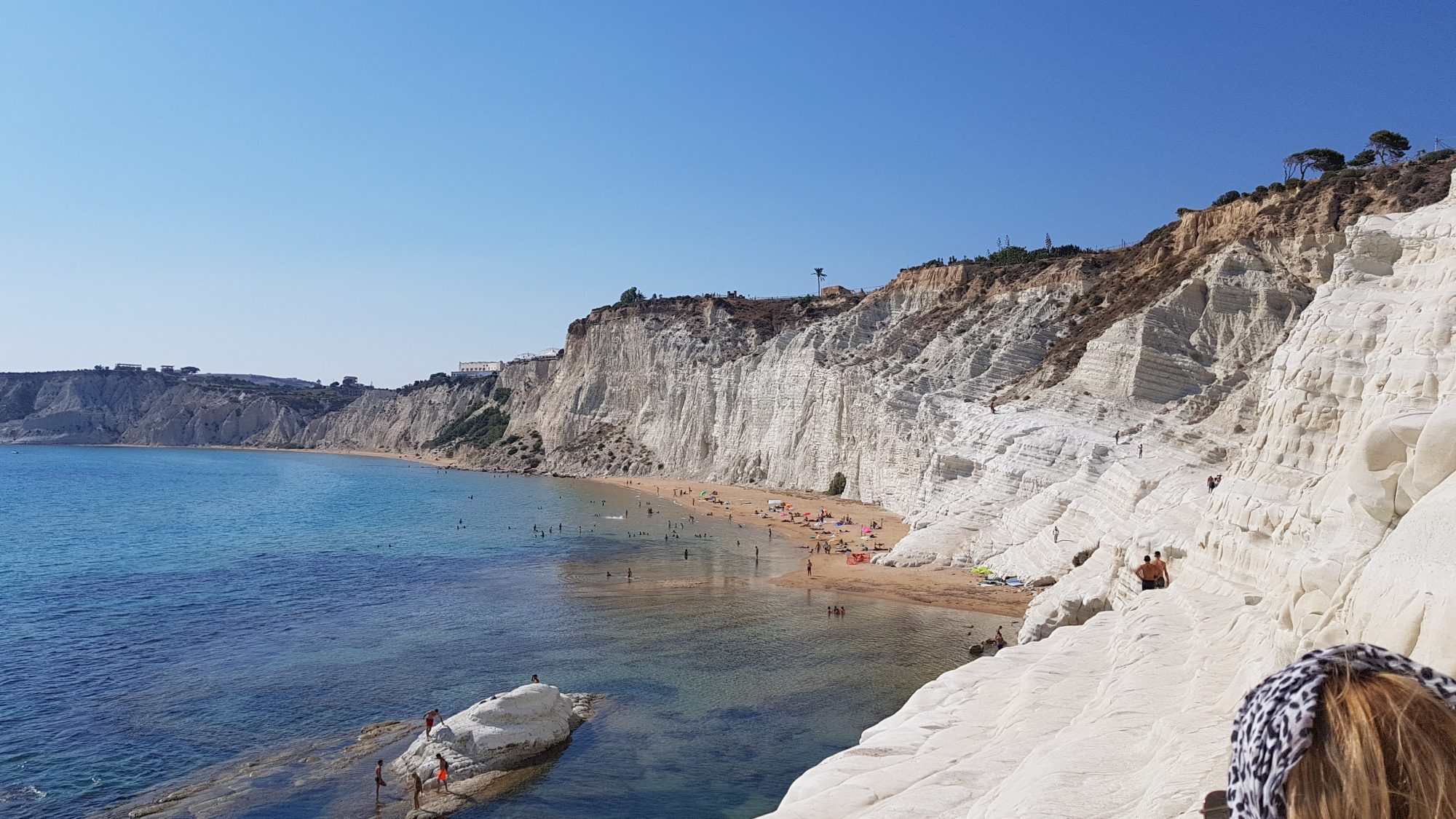 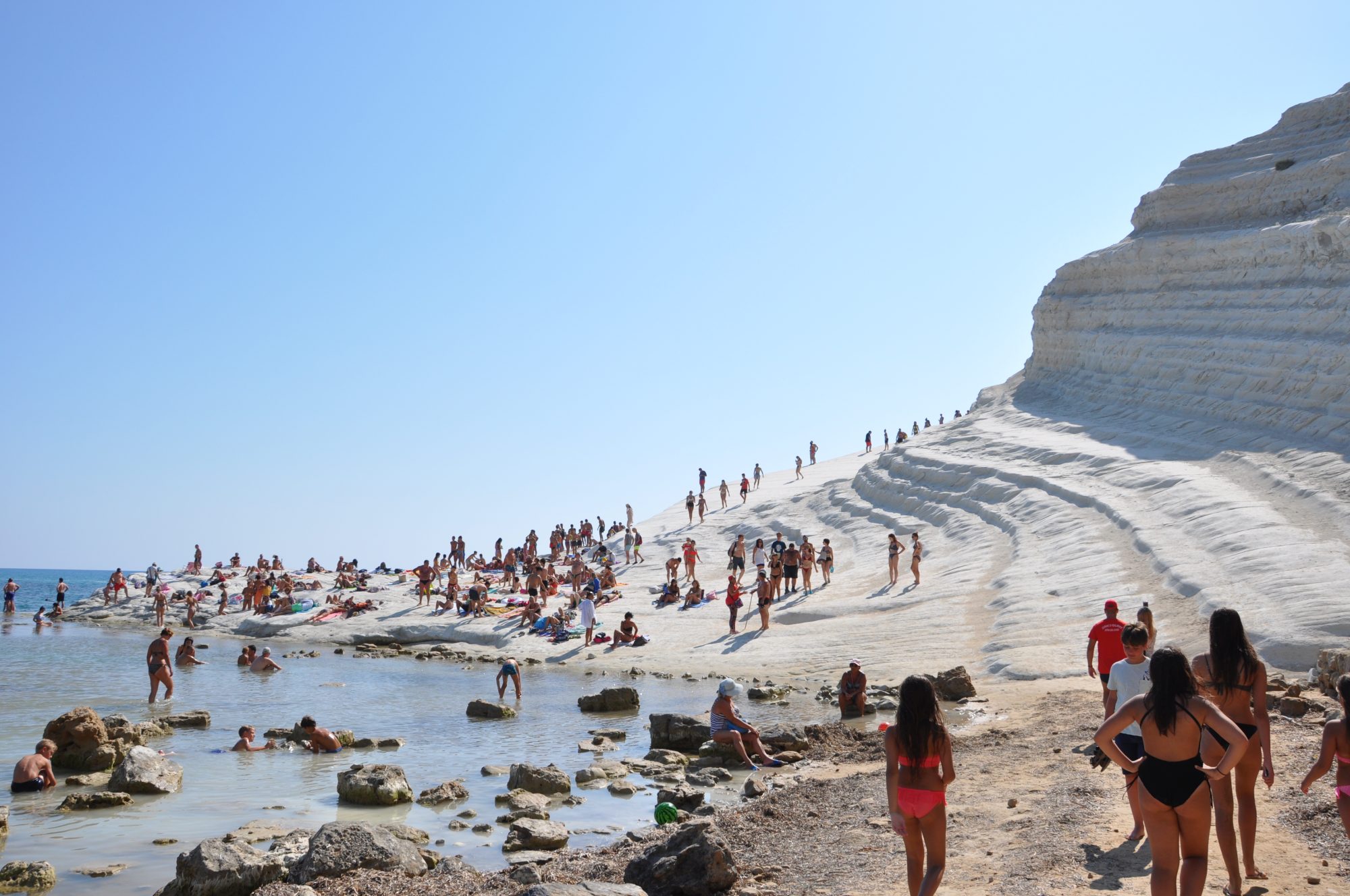 When confronted with such varieties it’s hard to decide what to skip and what to see, even during just a short walk. We chose Cefalu, another small town with narrow streets, situated between a tall mountain and the sea, 75 kilometers from Palermo. 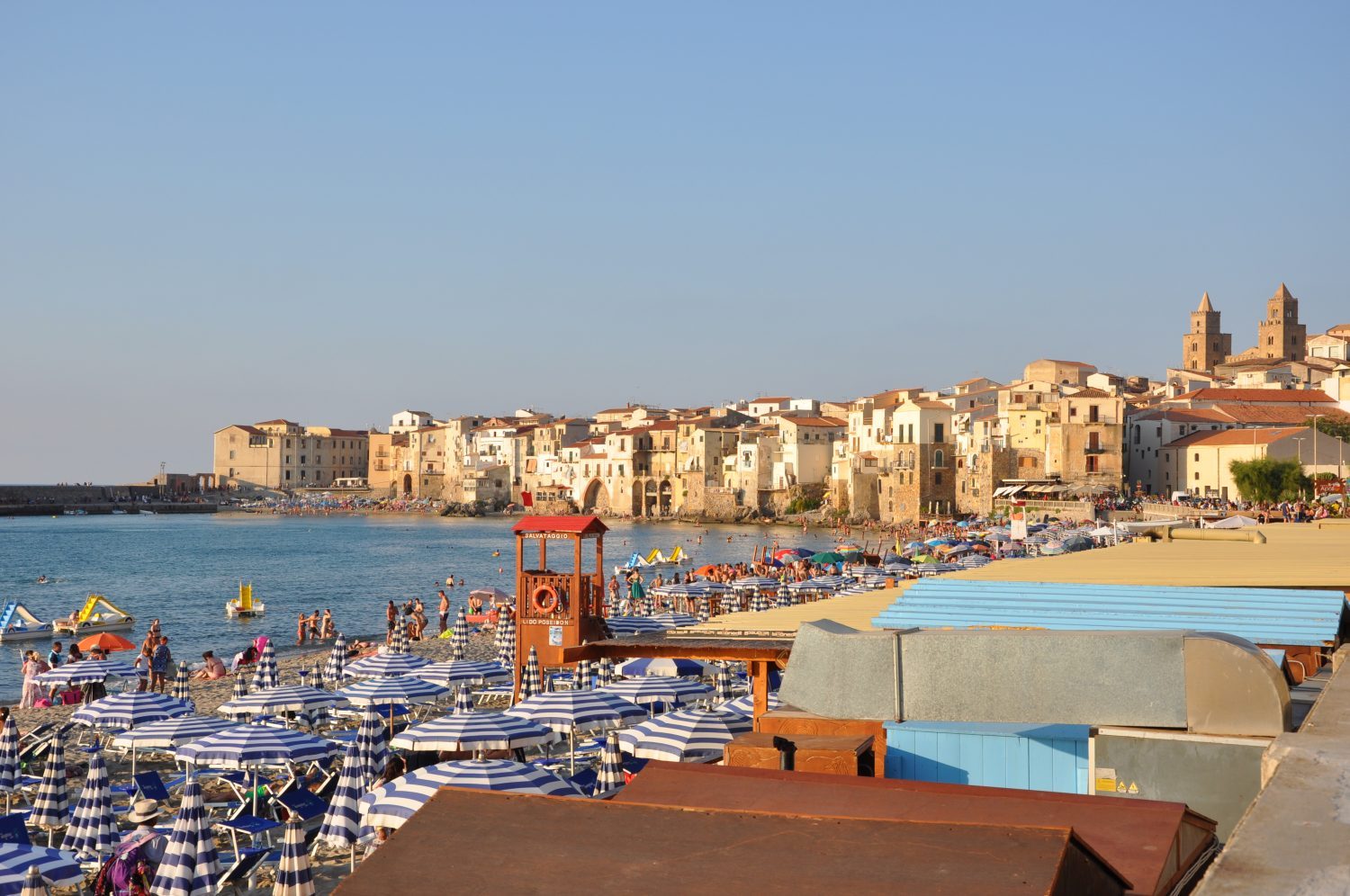 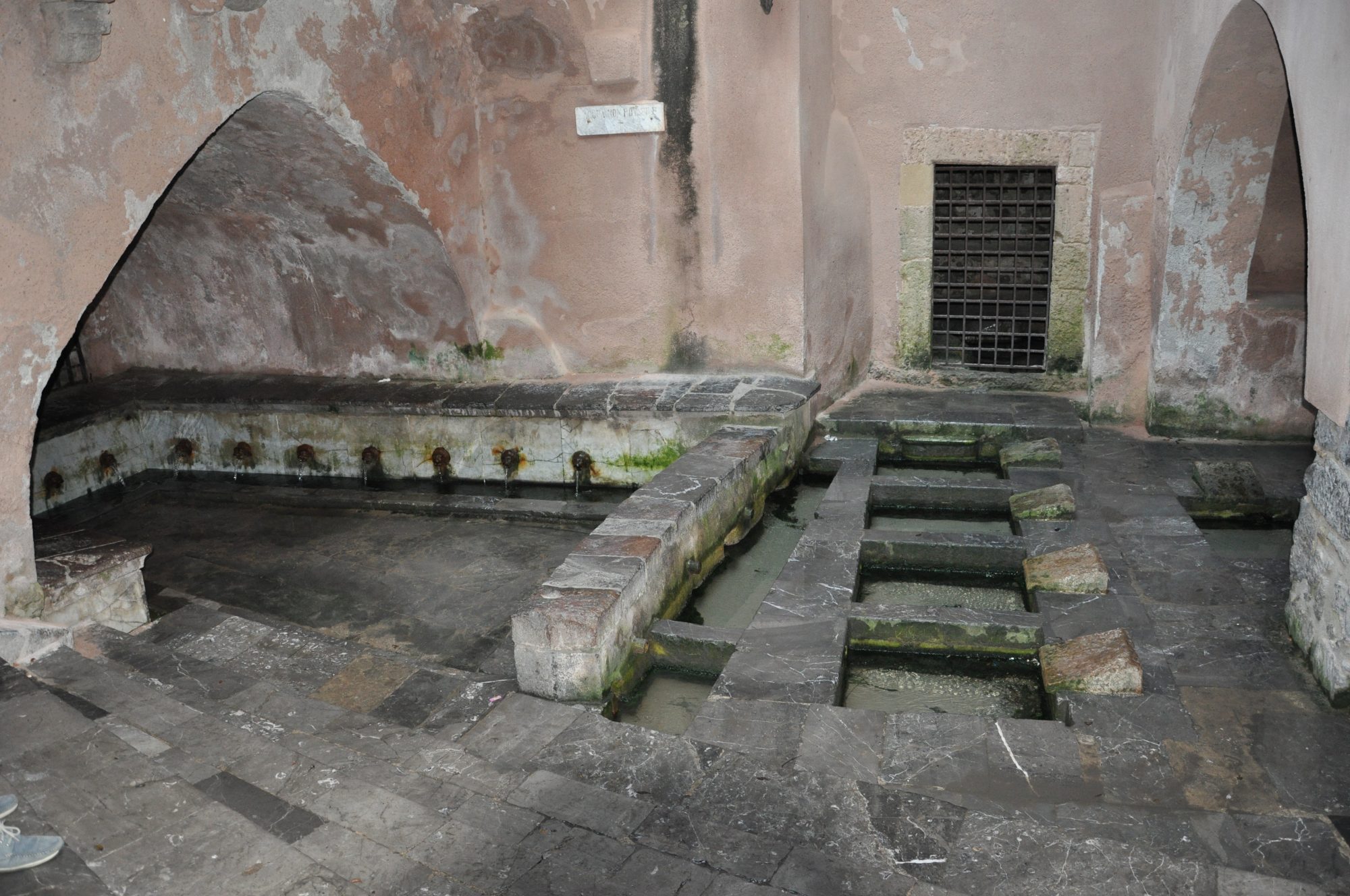 Here I ate the best seafood risotto ever, in a restaurant besides the sea on one side and Lavatoio Medievaleon the other, a medieval bath built over the river Cefalino, something you must see; you can try a Sicilian brioche on every corner – bread with ice cream; while the sunbeds on the city beach remind you of a traditional Italian family vacation. 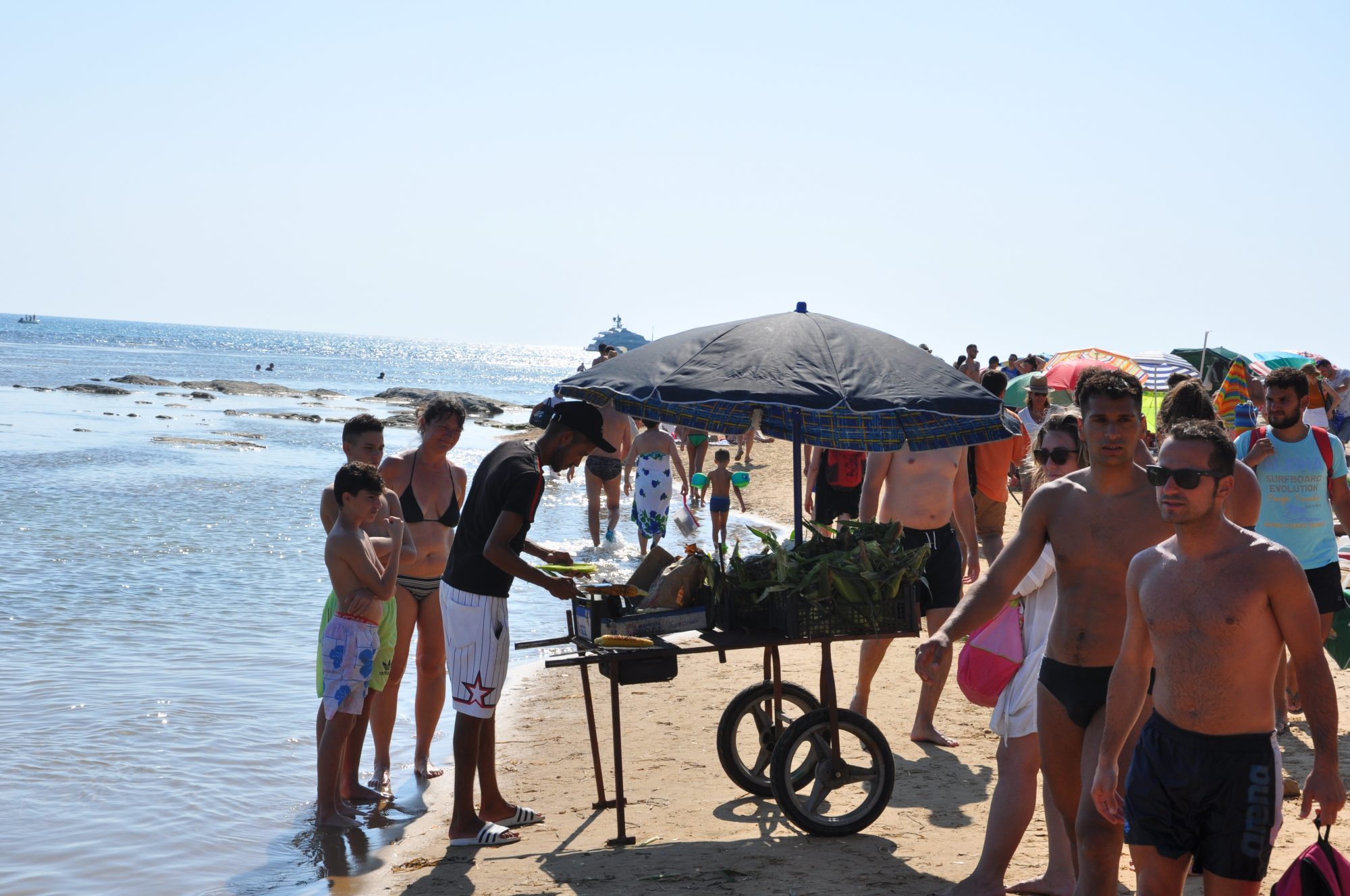 Another impression is one of the most expensive parking lots ever, because half an hour costs the same as 12 hours of parking – 10 euros, of course there is no printed receipt and local boys secure it. Should I even tell you that this parking is on one of the best locations, perfect for a luxury hotel! But who knows why it’s like that, it’s Siciliaaaa after all.

In the end, and after so many kilometers and places I just want to say that I breathed in the atmosphere of this island. There are many more left for another trip, maybe with and old-timer convertible? Hmmmmm

A morning person wants to while an evening one has to
HIFU the cellulite terminator, the first time
Mamma Mia, what beauty hides on Vis!
LIFE OF A FITNESS INSTRUCTOR IN THE UNITED ARAB EMIRATES
Follow on Instagram 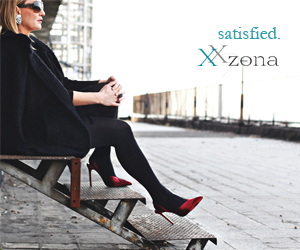