Working in a mine was always considered one of the toughest jobs out there and has always been – a men’s job. Nevertheless, there are women in Serbia who traded their heels in for rubber boots, overalls and a helmet, because they work in mines. They chose this job, are mostly highly educated and “fight hard” against stereotypes which follow this occupation. Little is known about lives of female miners in Serbia, even though they’re in a men’s job they haven’t lost one bit of their femininity.

In order to introduce the lives of miners to the common public Marija Djoković, graduated from the Faculty of Drama Arts in Belgrade, made a documentary film Ti si mene za oko zapala (You caught my eye) about these unique ladies. 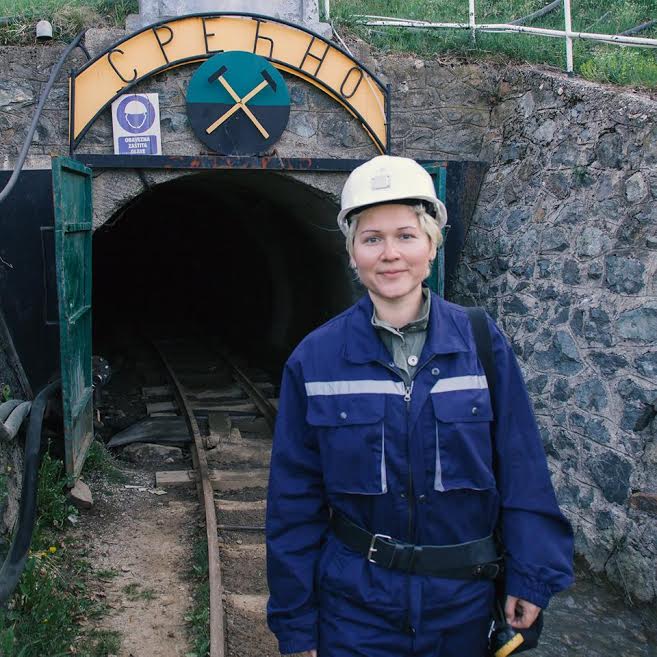 How did you come to the idea on making a movie about female miners?

During my studies a couple of coleagues from the Faculty of Drama Arts and I worked on a short commercial about a mine in mountain Rudnik near Gornji Milanovac. Our guide through the pit was a female mining supervisor who left a strong impression on us. Before meeting her we weren’t even aware of the fact that women work in Serbian mines. Nataša Janković, with who I’m cosigning directing the documentary film Ti si mene za oko zapala (You caught my eye) and I then wished to meet other female miners in Serbia – says Marija Djoković, producer and director of photography for this movie.

Both male and female miners told us that fear is good, it doesn’t let you get too comfortable, but makes you careful instead

Women in mines are impressive and interesting, but considering the fact that working on said commercial was our first trip to a mine, informing was in order. That’s how my series of documentary photographs of female miners from Bor, Senjski mine, Resavica and Rudnik at Gornji Milanovac came to fruition. I meet the miners from Senjski mine and Resavica on the shoot of RTS’s (Radio Television Serbia) TV series Čizmaši, and later on they introduced me to their colleagues from Bor.

How long was the preparation process for the movie and what was the hardest part?

Working on said series of photographs was part of the preparation process for shooting the movie and it lasted six months. Learning about their lifestyle in depth was necessary, gaining trust as well as choosing the protagonist of the movie. Not Nataša nor I knew any of them personally, we didn’t even know a lot about mining or a miner’s life in general. After the series of photographs the next couple of months were spent working on the synopsis and script of the documentary, since I came back from my travels with information about possible protagonists of the movie and characteristic life events from their environments. After that we spent two weeks in Senjski mine and Resavica for a trial shoot, so that later this summer, during July and August the movie would get shot. Let’s say that the whole preparation process lasted for two years…

The movie was shot in Senjski mine and Resavica, why these exact locations?

Because the firm Rembas, to which Senjski mine and Resavica belong, employ a large number of women. Bor is exploited in local cinematography, while the mines close to Gornji Milanovac employs a small number of women. Senjski mine is visually magical. The mentioned RTS’s series, which was shot in Senjski mine for two weeks, was my first job, so I’m as they jokingly say, their child. 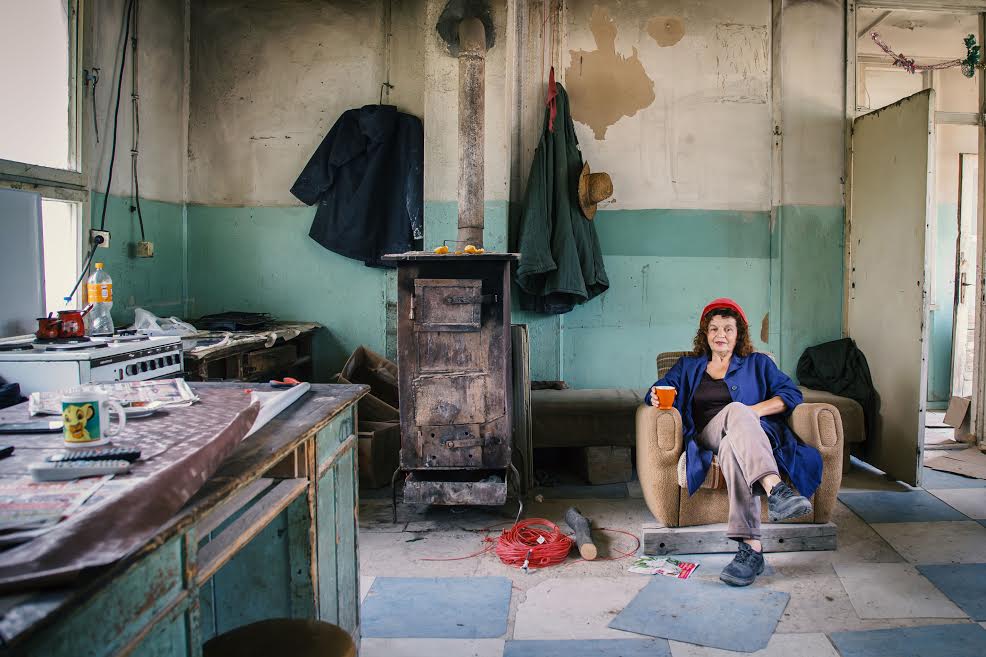 Did the crew (cameraman, sound engineer, you) go down into the mine, how did that look, were you scared?

Yes, we descended into the pit and filmed at coal mining sites. When it comes to coal mines, the pits are hardly accessible and dangerous, firstly due to the presence of methane which is highly flammable, therefore an explosion could occur. I was scared, although it’s not the paralyzing type of fear, it’s just impossible to be unaware of where you’re at and what could happen. Both male and female miners told us that fear is good, it doesn’t let you get too comfortable, but makes you careful instead. It wasn’t the first time Nataša and I filmed in a pit, but it was our sound engineers, he managed splendidly and enjoyed himself.

The film has an intriguing name Ti si mene za oko zapala (You caught my eye), why?

It’s inspired by an anecdote from making the series of photographs… One young miner told me You caught my eye. Nataša and I found that direct approach impactful and decided to call the movie so, because the story is about female struggles in a patriarchal environment between professional self completion and the need to be loved.

How long was the shooting process, which phase are you in now and when can we expect the premiere?

The shooting lasted for about 20 days. We’re currently in the phase of montage, which in reality is the first phase of postproduction, so we can’t put out an exact date of the premiere, there is still much work ahead of us.

Women in Serbian mines don’t do the hard physical work, but they work in all parts of the mine a man would work in, including the pit

Do you plan on attending any festivals with this movie?

The festival lifespan of a movie is usually two years, so we hope that it will air on as many domestic and foreign festivals.

Besides for you, who else is in the crew behind You caught my eye?

I am the director of photography and director, Nataša Janković is also the director but the producer as well, Luka Barajević is the sound engineer and designer, and since we’re currently at the stage of montage the newest member of the crew is Mina Petrović.

Can you tell us something more about the lives of female miners, what does a normal day in their life look like?

Women in Serbian mines don’t do the hard physical work, but they work in all parts of the mine a man would work in, including the pit. They are usually mining engineers, supervisors, geologists… Amongst the protagonists of our movie is the first female mining superintendent in the history of Serbian mines, an activist for women’s rights in mining, a woman working on finishing of ores and whose son is also a miner and who will win the hearts of the crowd with her optimism and love of life.

What intrigued you the most about the lives of miners?

Mines are a world for themselves and that world is incredibly “movie-esc” – the people, their faiths and daily lifestyle, then the environment they work and live in. Which intrigued me the most at first as someone who is in film and photography. It’s not surprising that miners were an inspiration in both local and global cinematography. I was later mesmerized by their courage, mental profile, those people work a very hard and dangerous job on a daily basis. When it comes to female miners specifically, I find the way that women handle themselves in a men’s world fascinating, more precisely a men’s job, the challenges they face. 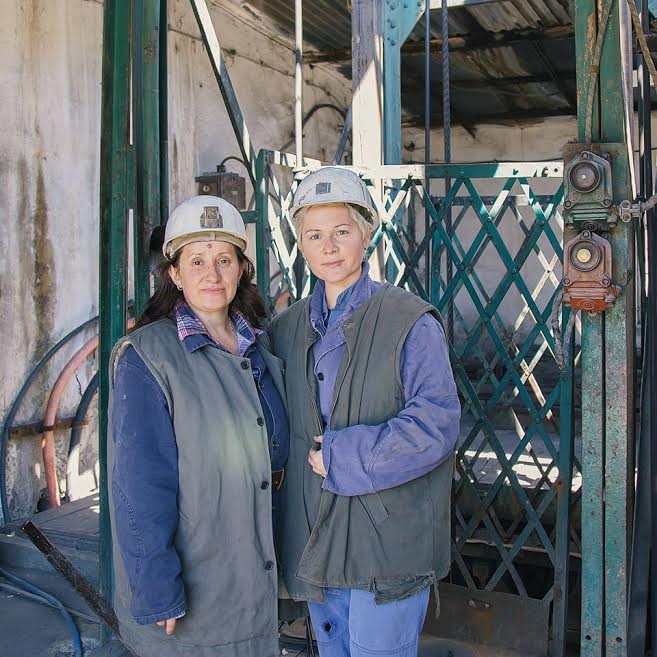 It was only after the Second World War that women started descending into the pits, before that they only worked on surface layers of the mines

Could you see yourself as a miner?

No. Even though, allow me to joke, Nataša, Luka and I are more qualified for the job than an average citizen. I suffer from slight claustrophobia and believe that I wouldn’t be able to mentally handle spending long periods of time in the dark on a daily basis. I made many trips to the pits, while working on photography and while filming, but I managed that only because my focus was on panning, had it not been so the panic and fear would have probably been unbearable. I agree that mining is the hardest job in the world and that not everyone is up for it…

What is the reason, in your opinion, that so little is known about women working in Serbian mines?

Because the hardest physical jobs, necessary to extract the ore, fall on men, while the glory follows. Also it was only after World War Two that women started descending into pits, before that they only worked on surface layers of the mines. One other possible reason could be awareness of gender equality which only just started developing in our region. I remember people telling me that no one will accept a women when I was enrolling for camera work, they accepted five girls and three boys. So I’m not surprised by stereotypes when it comes to mining. It’s interesting to know that amongst women working in mines there are both young and women close to retirement, while the young ones aren’t always from mining cities.

In the new millennium we still wear fur like our ancient ancestors, why?
MARRIAGE TODAY – NEED OR A PARODY IN THREE ACTS
KARPO GODINA: TODAY, I WOULD REALLY BE A TRUE DON QUIXOTE…
SOME STOLEN BABIES ARE ALREADY FIFTY-YEAR -OLDS
Follow on Instagram