The deep blue waters mirror the white peaks of the Alps, while the smell of Mediterranean pine opens up all senses. Lago di Como, surrounded by romantic towns, the place for a long, spring walk

We’ve been crossing out the lakes of northern Italy, one by one. This time, without any previous planning, we decided to spontaneously wander around Lake Como (ant. Lario). And to do it before the spring awakes. That odd time, in March, for exploration of Lombardy, created our need for eternal returns: in blossoming spring, warm summer, crisp fall or powerful winter. To me it doesn’t matter, as long as I can breathe somewhere there, bask in the energy of powerful water and at times gaze upon the Alps. 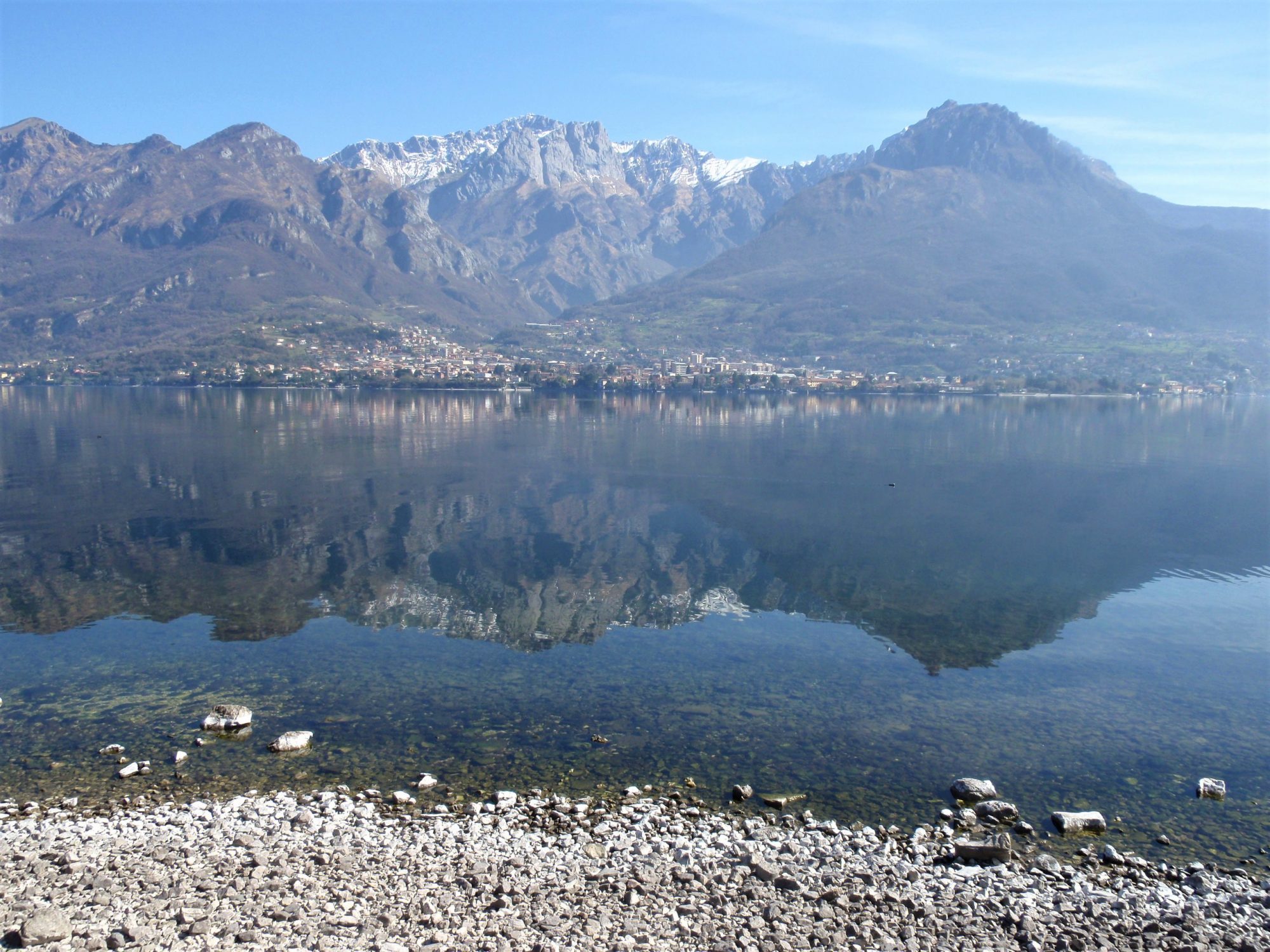 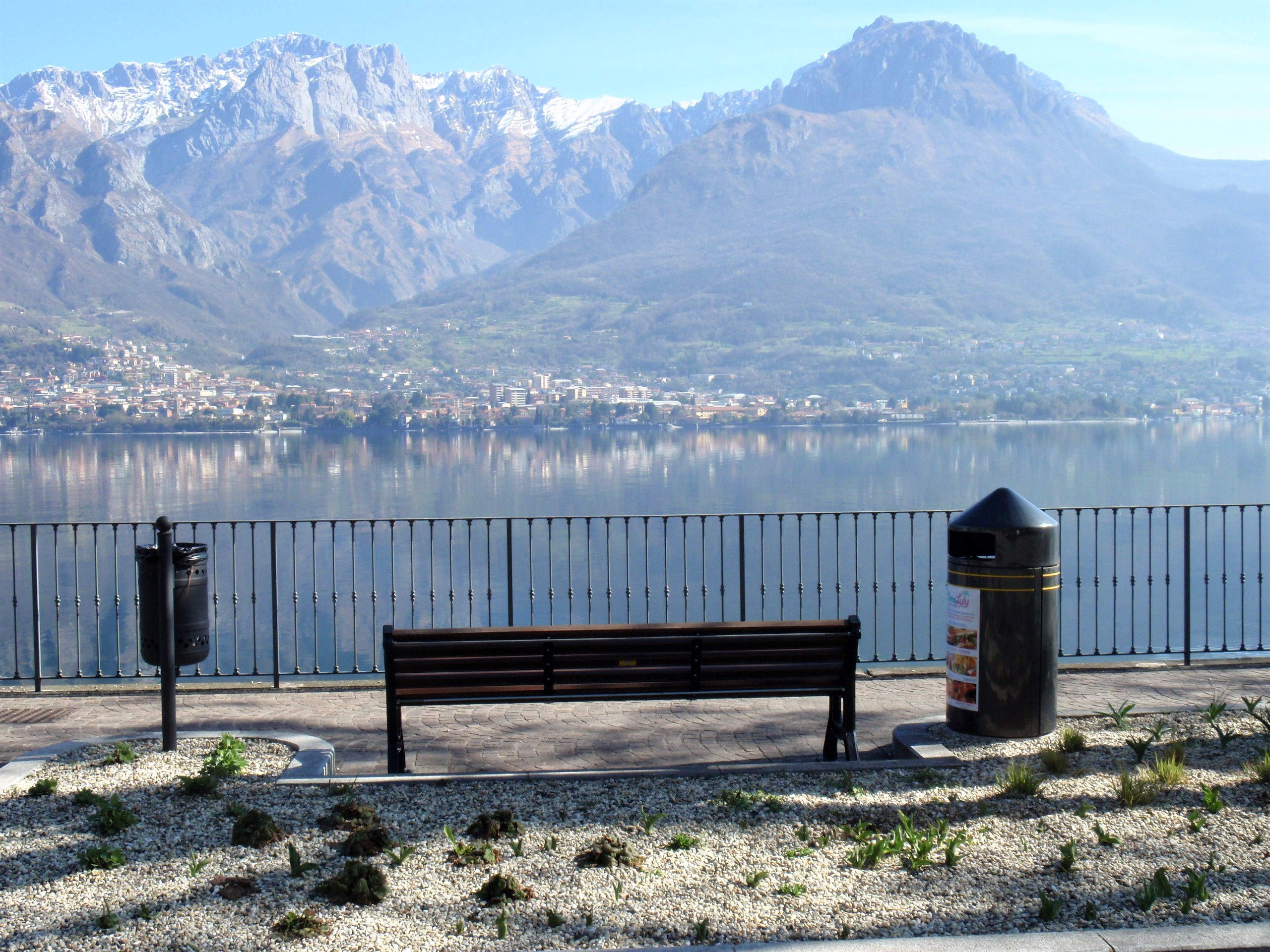 The lake is quiet and powerful, too deep and windy. They say it’s shaped weirdly, but what is so weird about the Greek letter lambda λ or the alphabets letter Y, but turned upside-down? Most travel guides will compare it to the upside-down Y, but the Greek letter λ sounds better, just because it isn’t turned around. And because the two diagonals of the letter create a triangle called Triangolo Lariano (Larius, Latin name of the lake), but in fact it’s a peninsula with a gorgeous town of Bellagio at the top. That’s were the proud peaks of Corni and Canzo stand, their residents being many protected bird species, fish with specific habitats – natures miracles. Seven smaller lakes, on the very beginning of the peninsula, are surrounded by extraordinary landscapes being created by white limestone rocks. 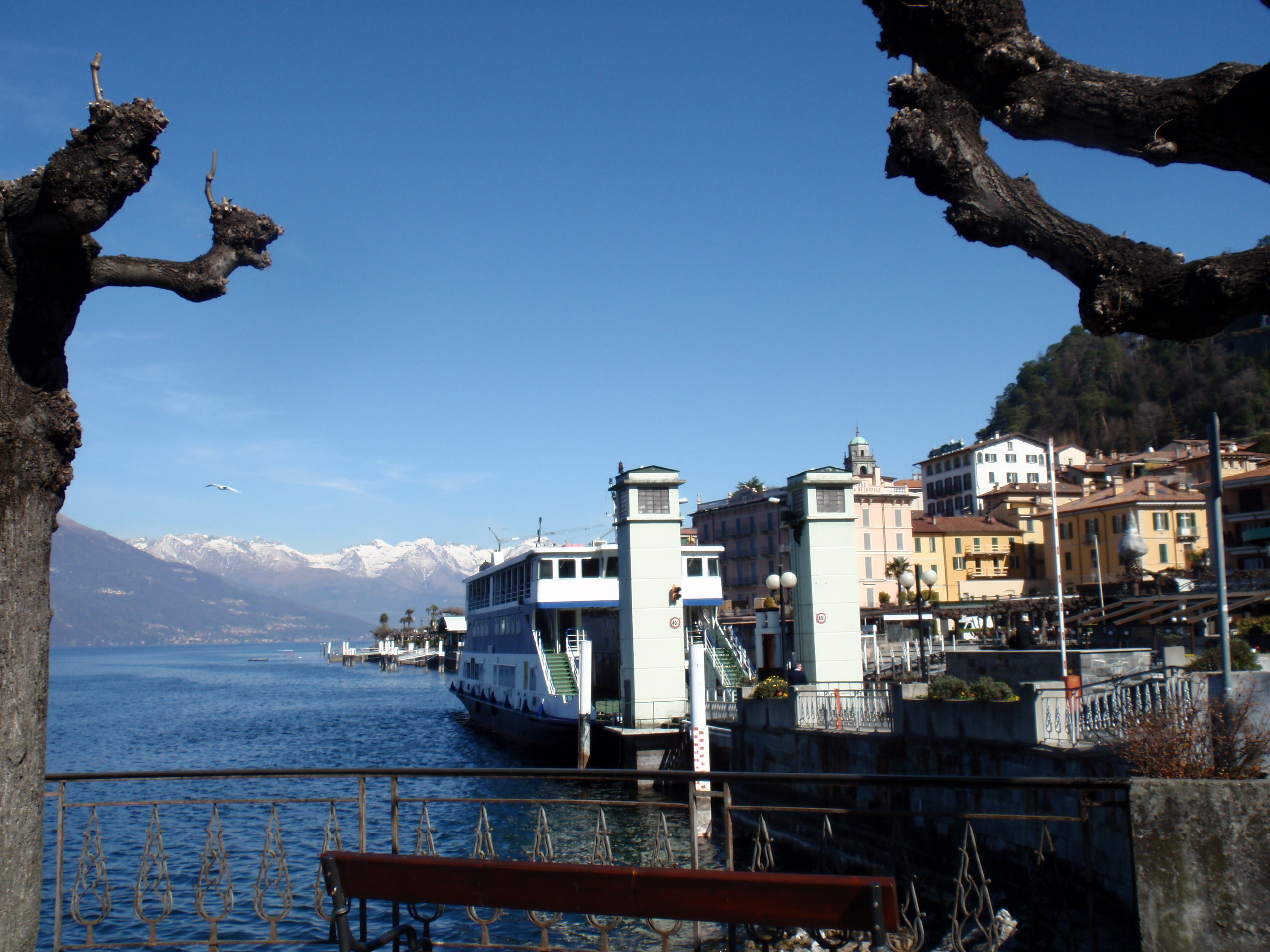 Lake Como is one of the largest and deepest in Europe. It hides its bottom at the depth of 400 meters, which is around 200 meters below sea level. The dark blue color comes from the river Ada filling the lake at its top part and leaving it by the town of Lecco.

Various celebrities and rich crowd have always enjoyed their real-estate and perfect microclimate of the Lake. I will avoid them in my tales, all but one exception. Or two: internet claims that Richard Branson owns a beautiful villa on the Lake, while Instagramers take pictures in front of a couple of “his” villas. An oddity is that the owner of Virgin company claims that this is all new to him.

We settled in a cute apartment, by the shore of Lecco. The owner was so kind to bring us warm brioches every morning even though they would disappear before we would finish saying “oh, grazie, you really shouldn’t have…”. Each morning we would turn the machine on and go wherever we pleased. I even made reservations for bicycles hoping for a recreational biking but that turned out to be an example of my unrealistic optimism (they stayed as beautiful detail in photographs). 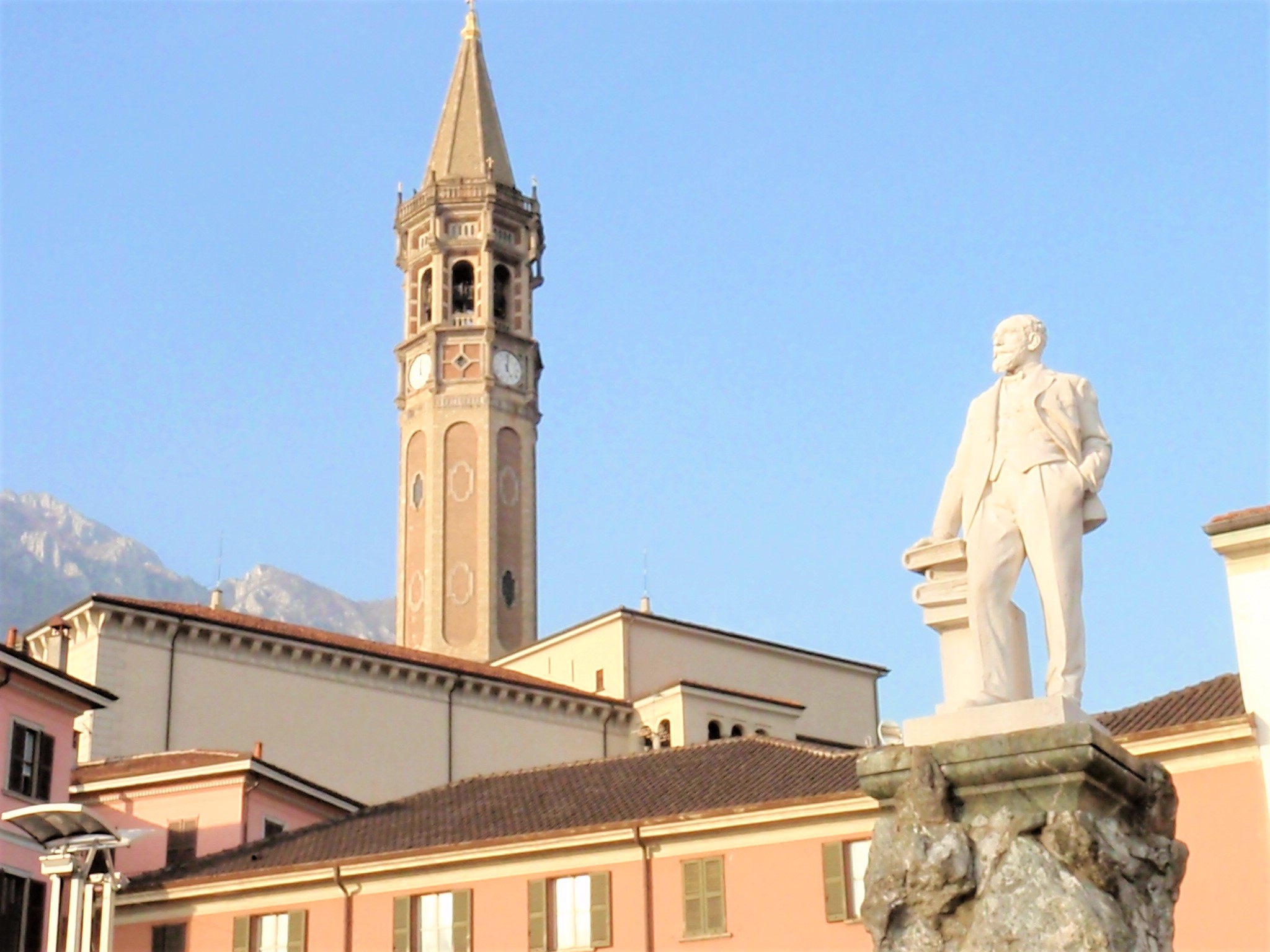 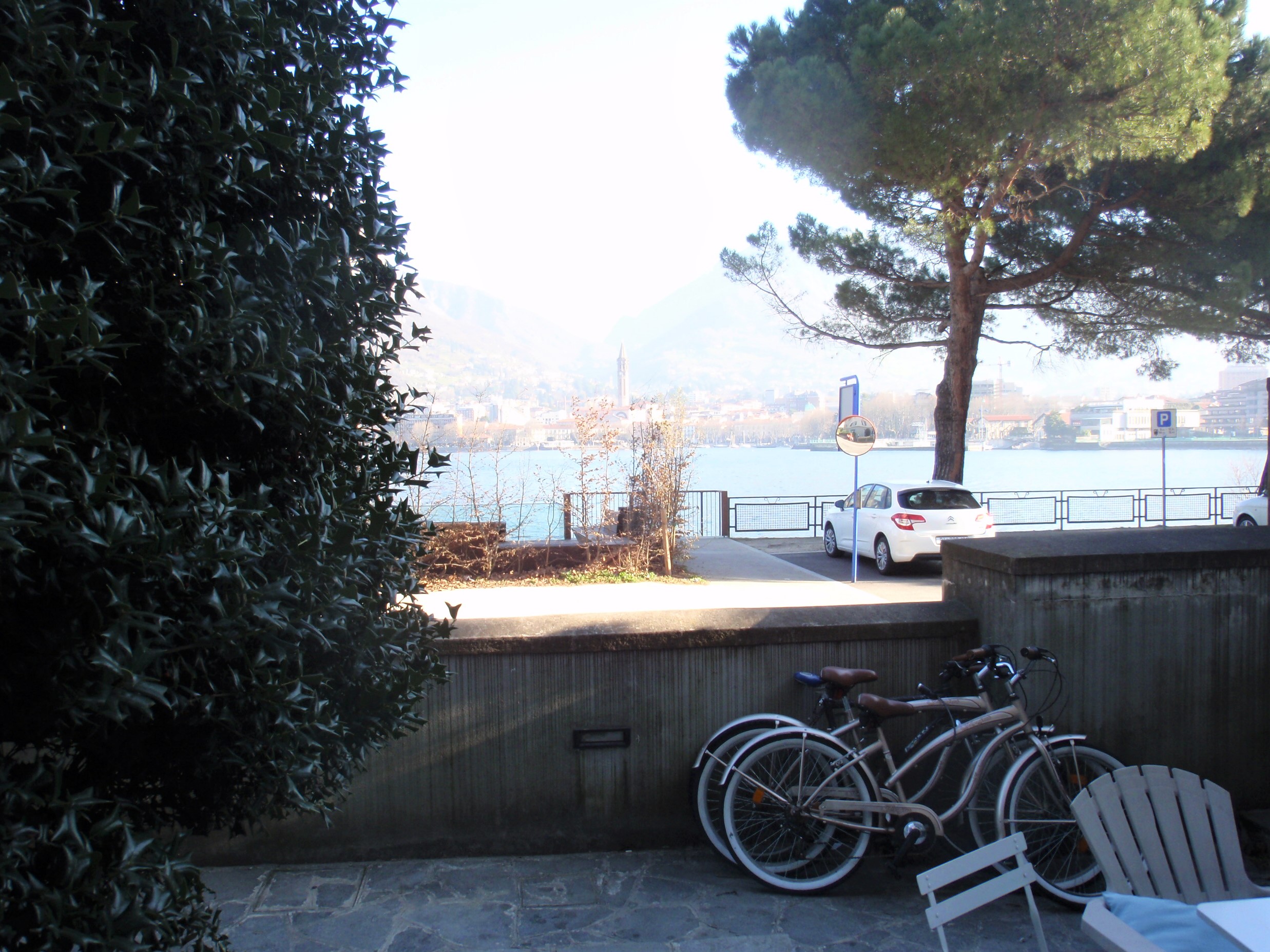 The winding road from Lecco brought us to the center point of the lake, the romantic town of Bellagio. It was glorified as one of the first international tourist spots in Europe by famous artist from the romanticism era in the 19thcentury. It’s where Franz Liszt, Byron and Flaubert created but also where the esteemed mister Metternich and Ferdinand I enjoyed. The famous architectural beauties are Villa Serbelloni and Villa Melzi d’Esti, surrounded by other noble houses and luxurious parks. Lungomare is ideal for a quiet walk, as well as the streets and parks given for our aesthetical healing. My view of the lake over a gelato is fantastic: it was an ideal sunny day, the lake was dark but clear, with tall green palm trees contrasting the snowy Alps in the distance. Boats are very common; they connect almost all places on the shores. Navigazione ports are tiny, simple and often made of cast iron. I’m not being ironic, but even the ducks walking and swimming freely are somehow very posh. 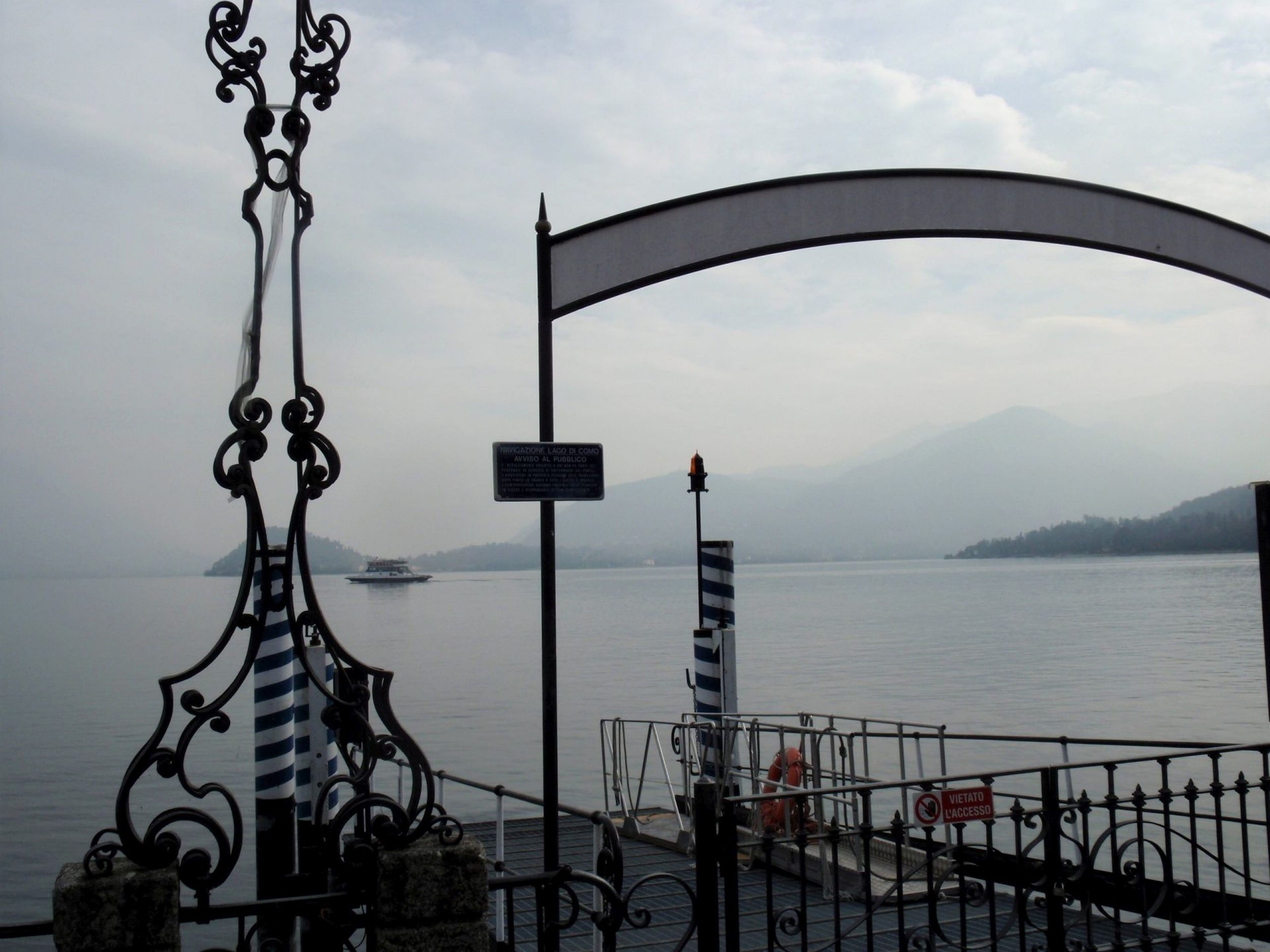 The next day we headed for Como town, situated on the western part of the lake, opposite of Lecco. My excitement for finding myself finally in this city slowly turned into nervousness. Wherever I headed in my car I couldn’t reach because I kept entering forbidden and closed-off areas with surveillance and reserved only for their occupants. The parking lots were full of course. After circling the city for an hour I gave up. I consoled myself with the fact that the whole lake was waiting for us and that we would come back anyways… behind our backs we left an unseen famous beauty, Villa Olmo. 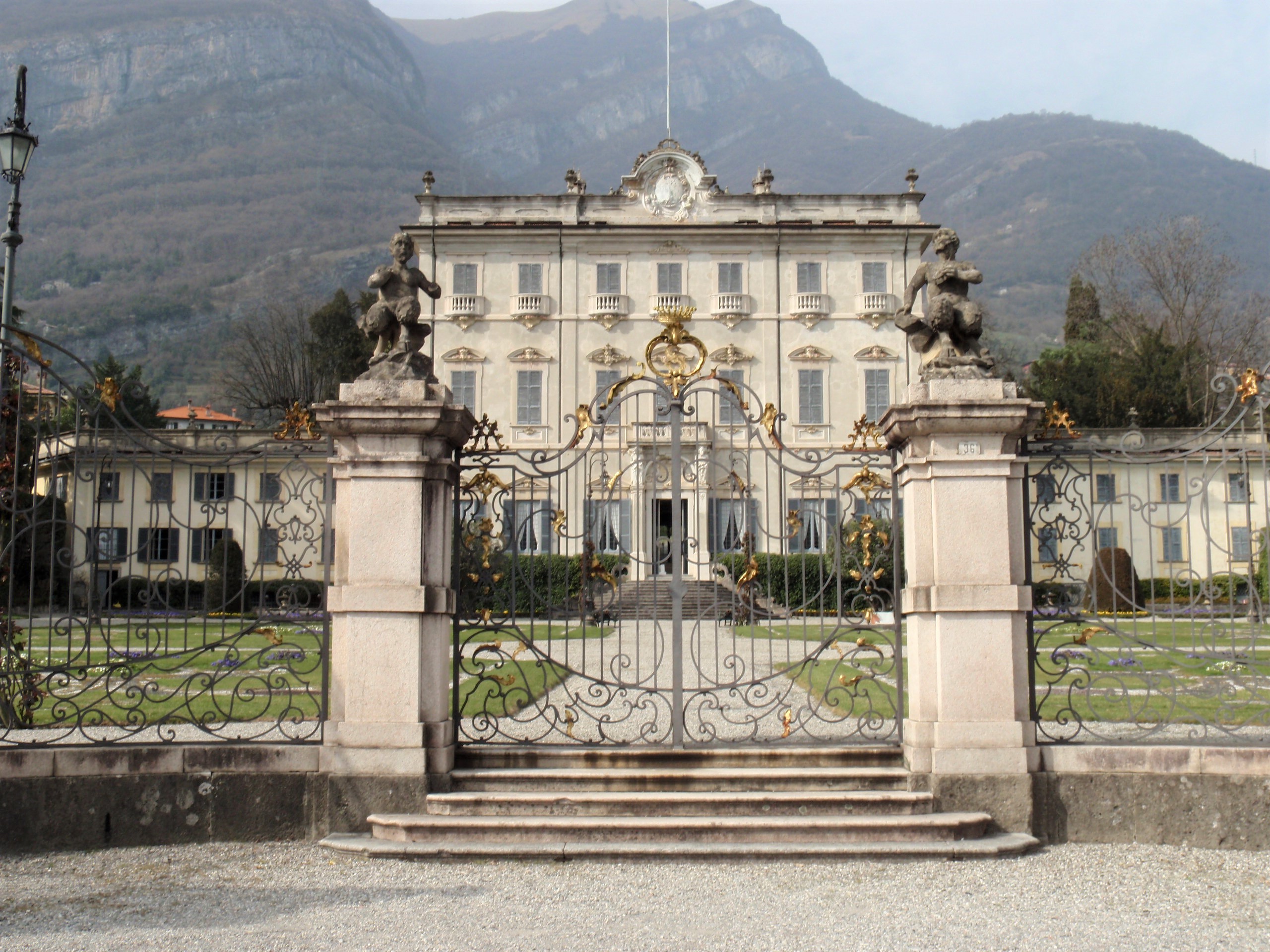 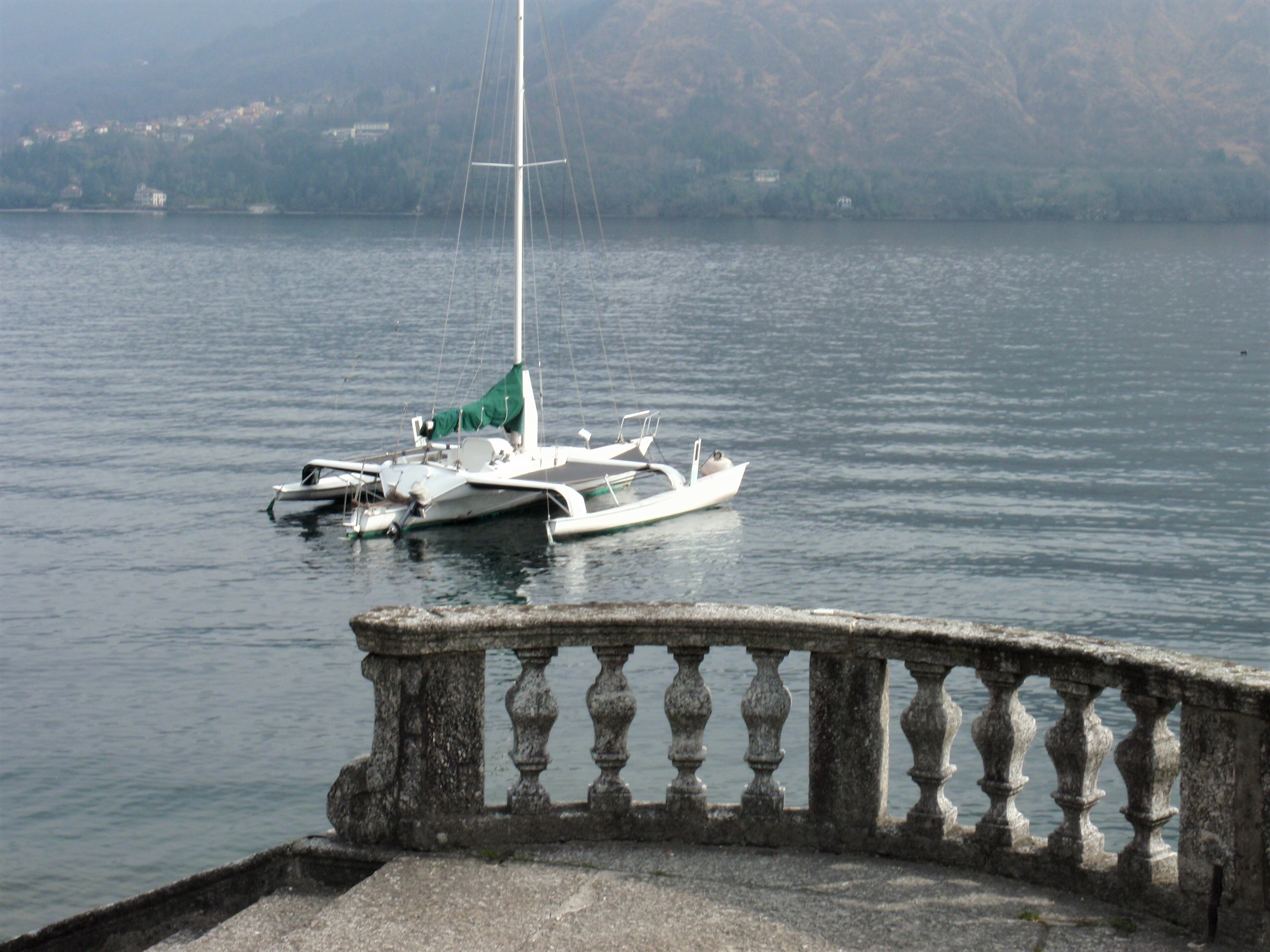 Many beautiful, neoclassical villas tucked into shores of the lake were built by rich nobleman, competing in beauty, style and abundance. Some are a couple centuries old, others are grand, but all of them always perfectly positioned. Some are glamorously renovated, and some are sadly abandoned and decayed. But, even so, these beauties still manage to impress with their style and grandeur. They are surrounded by precisely projected parks and gardens, filled with cypresses. Many of the villas are noble hotels or for rent. The road winds following the coast and allows us to drive lazily and enjoy wherever our eyes land. We pass through small cities that resemble each other at times.

The first next city is Cernobbio where the grand Villa D’Este is located, a gem of the cinquecento architecture, also off limits to visitors, unless you are staying at this luxurious hotel. Unfortunately the garden of another villa, Villa Erba, was closed off to visitors on that day.

The city center was full of stunning houses, cafes and restaurants. For an hour of renting a retro glossy speedboat, alla James Bond, and a gentleman asked us 150 Euros. We continued forward, but more and more often we took some gender across the lake. Streets, stone stairs and fences of the villas are somehow imperfect, often covered with ivy, while the driveways are rarely paved. And that exact general patina leaves an impression of eternal elegance and charm. 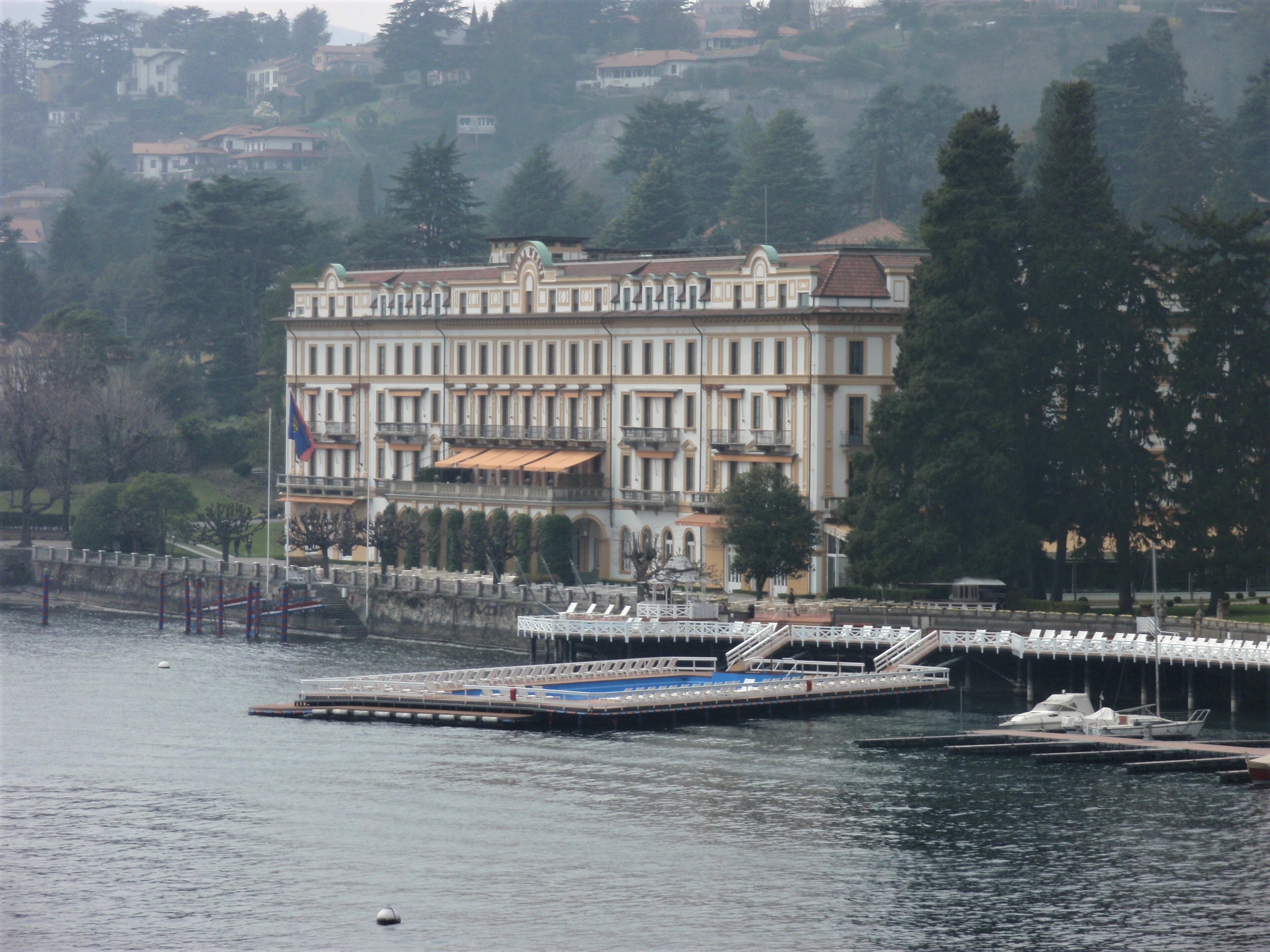 Later on we explored small towns on our way north, like the charming Moltrasio. Vicenzo Bellini lived here for some time and drew inspiration from beauty while composing his operas. But, the clouds started gathering above the lake and we headed on. Then we entered the famous Laglio (second exception). A tiny place, with villas only along the lake where, carried by the extraordinary XXZona instinct I managed to find a small driveway of a villa where one extraordinary woman rests, with her children husband, an actor named Georg. Of course this was a matter of pure luck and Amal Alamuddin Clooney. My friend Goca warned me not to return home without my own photograph of Villa Oleandra, and I never let my friends down. I compared my photograph (verification) with ones of world agencies and yes, they stood in the same place as BKG did. 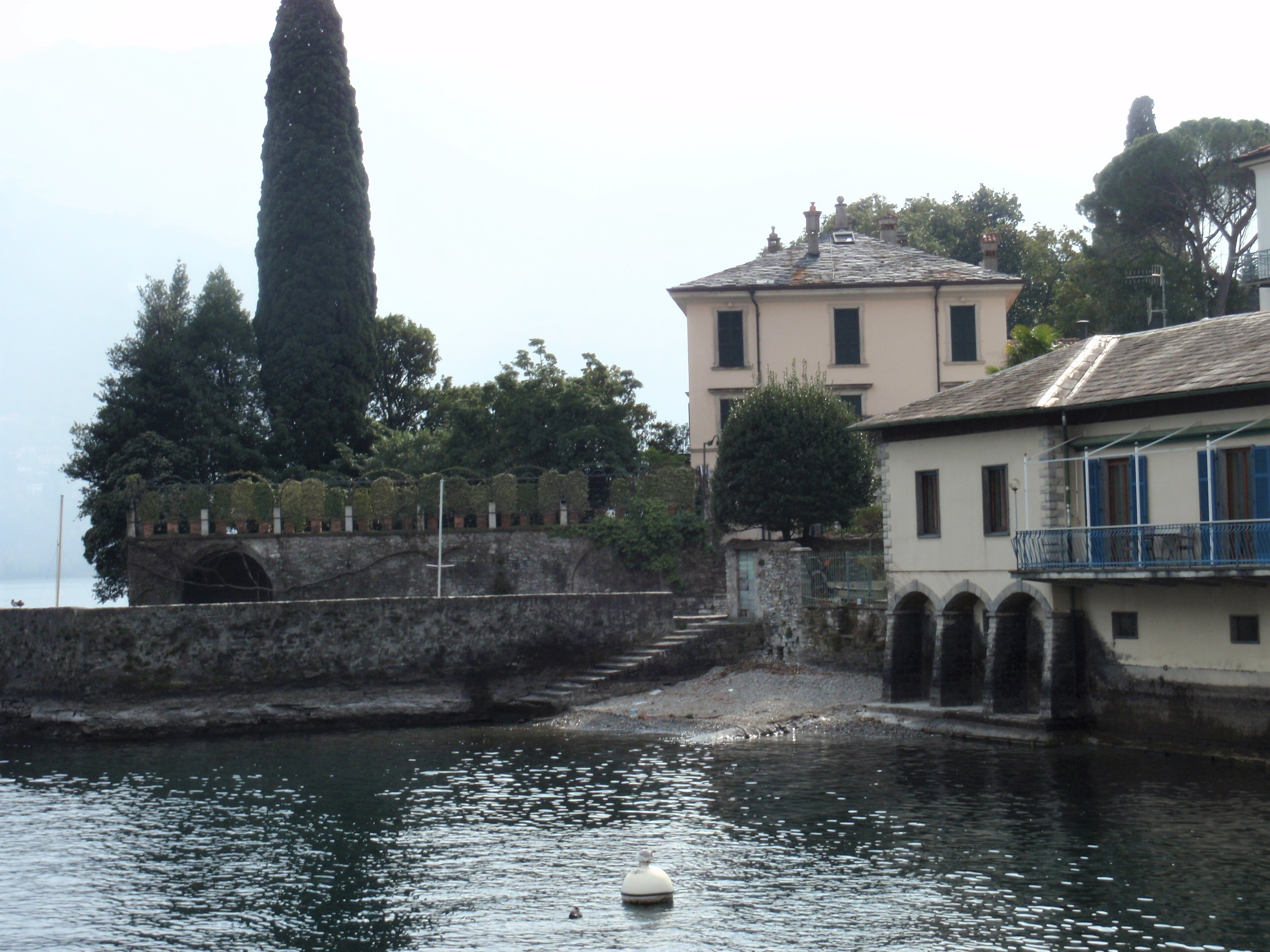 Lake Como has only one island, and a tiny one in fact, named Isola Comacina. Its rich history was brought back to life with archeological sites of Roman buildings and early Christian churches. As we were told, a famous restaurant, Locanda dell’Isola Comacina, hosted many world known names, including members of royal families.

The next day the road took us to Tremezzo, another inviting town whose coast was dominated by the grand, 5 stars Grand Hotel Tremezzo. Hotel has powerful architecture, and its lower levels are completely covered with ivy. Decorated with wood, the hotel pool is drowned in the lake. By now our eyes are used to the perfect beauty wherever we look. I am sensing the problems to come once home… The most famous beauty of this place is Villa Carlotta from the 16thcentury, built by a family of silk traders, Clerici. The villa has beautiful gardens and an amazing view of the peninsula and Bellagio. 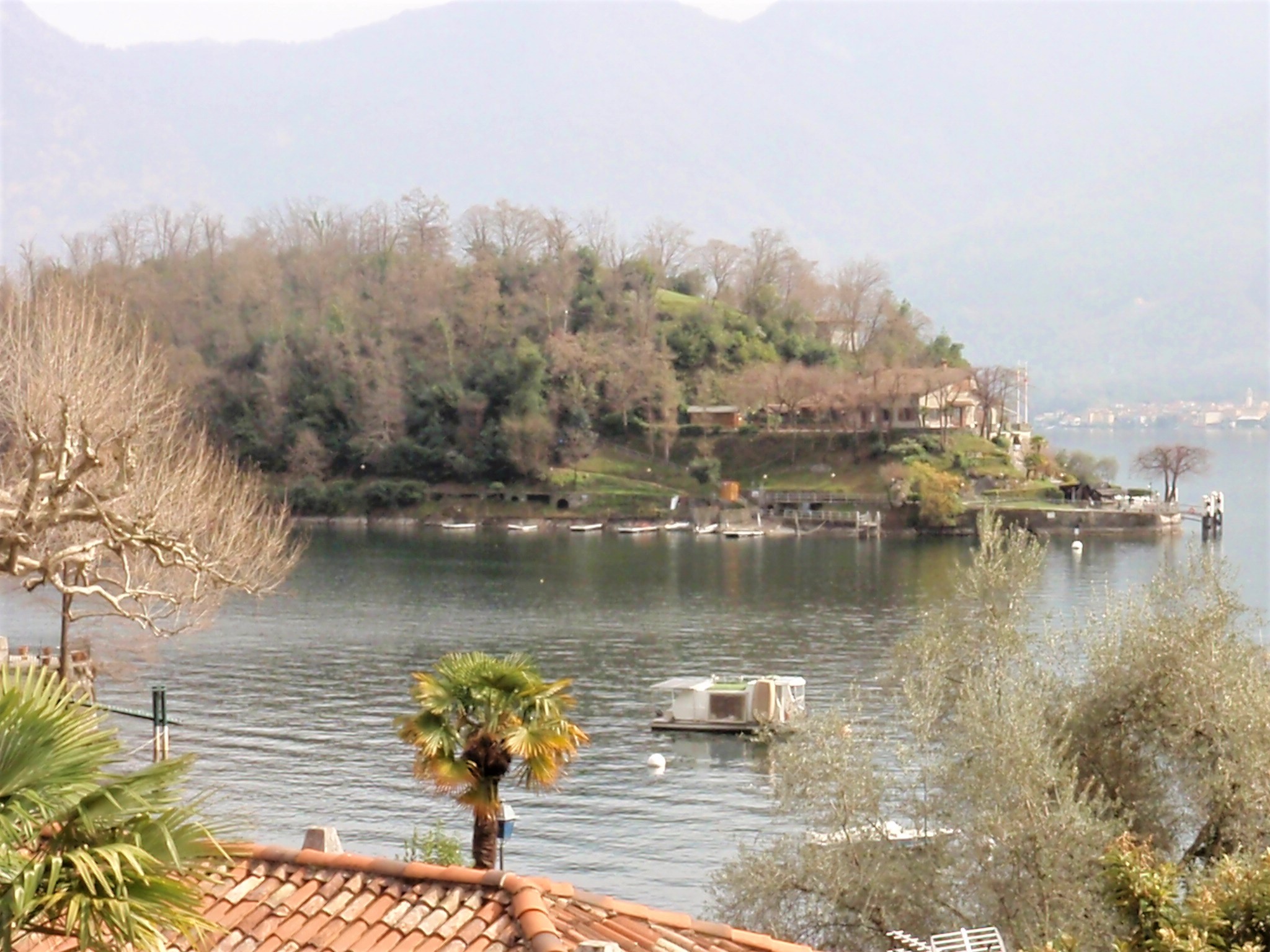 Then we arrive in Mennaggio, a town with around 3000 inhabitants, which is almost three times more than any of the previous ones. Lungomare here is magical, decorated with flowers and some sort of vibrantly colored cabbages. After wandering around for an hour, the faint rain started suggesting a better plan to be invented. The boat that appeared in front of us seemed the logical choice. We boarded our car on the ferry and set course for the other side of the lake. Once you’re on the water, the lake feels very different; everything has a different dimension, almost prettier than the one on land. Only for a second did the sun managed to break through so I managed to create some of the last photographs with a dying battery.

Our lovely dog shortened the trip by stealing treats from my bag (they are hers anyways). The boat lands on the east side of the lake, in an old fisherman’s settlement, Varrena. Plenty of colorful houses are a bit different from the ones on the west side. Careful wandering can lead you to a castle with spectacular views of the lake or up to Villa Monasterio which is turned into a museum. The same rule stands on this side of the lake, you will see very little of the lake shore unless you find a way on foot between the palms and cypresses. 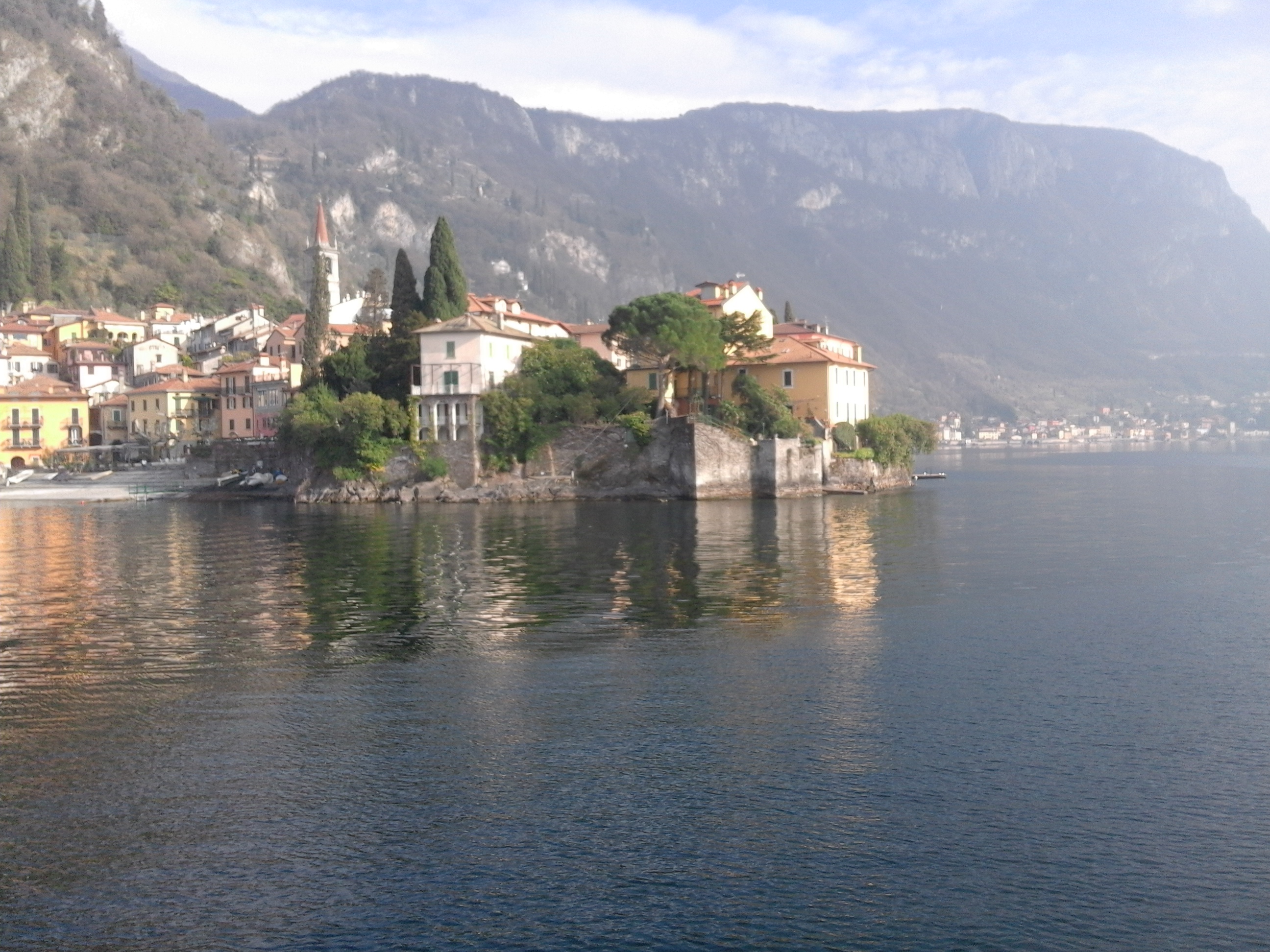 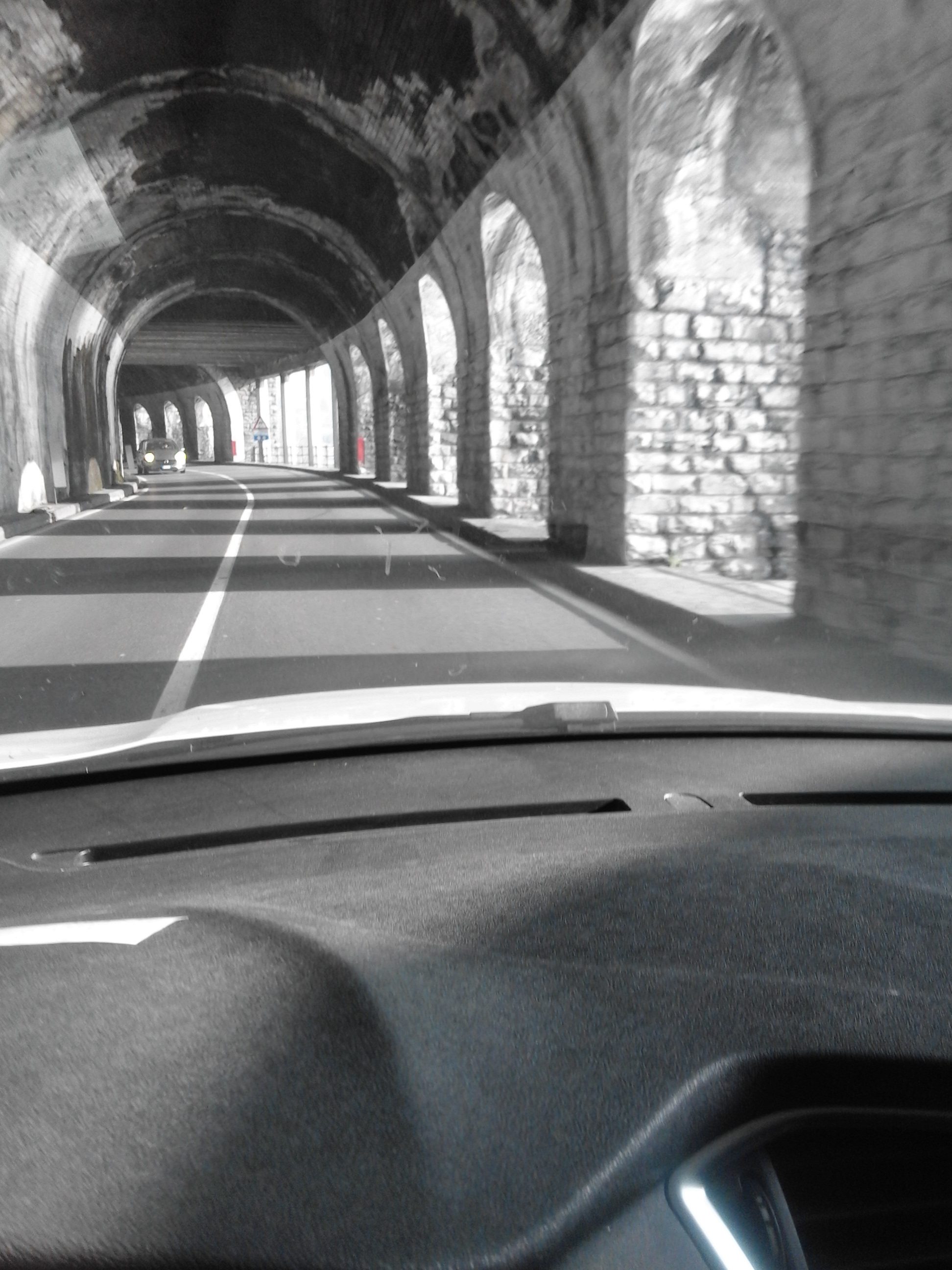 The road leads us further, but the cities we pass don’t have the same aura as the ones on the west coast did. Fiumelatte, Lierna and Maggiana are different, the impression could have been wrong or we could have simply been tired. I enjoy driving through those half open tunnels, so called galleries, where one side of the tunnel is open with arches and frames making panorama of the lake visible. In the evening we arrived all the way south to “our” Lecco, where, for this time, we said goodbye to the lake with a fine dinner. The next morning, we had a new plan…

A morning person wants to while an evening one has to
Mamma Mia, what beauty hides on Vis!
LIFE IN VIETNAM WHEN YOU’RE NOT VIETNAMESE
A good (organic) attitude goes a long way
Follow on Instagram